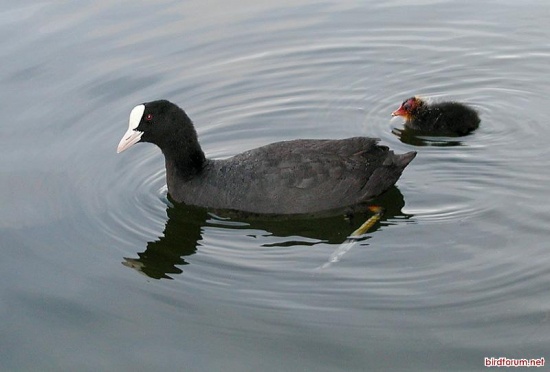 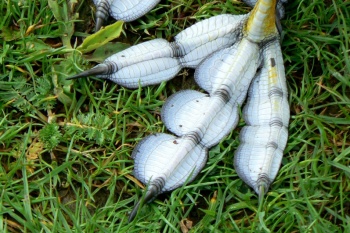 The Eurasian Coot is very dark grey with a black head and neck, a white forehead and bill and red eyes. The feet are large and lobed. This species resembles the American Coot (F. americana) from which it differs in that Eurasian Coot lacks the dark red callous at the top of its frontal shield. Eurasian also lacks the dark ring on bill tip, and lacks of white undertail coverts. Eurasian is unique in having the proximal end of its frontal shield pinched by pointed wedges of dark feathers on either side. Newly hatched young are mostly black and have a typical red head. Older juveniles and immatures have pale breast and throat and are mostly light grey to grey-brown on the rest of the plumage. At these ages, the bill is yellowish.

Races differ in size and intensity of the black plumage, and also in head pattern. The race F. a. australis lacks white tips to secondaries and underparts are darker. Its bill is pale greyish-white. Legs and feet are grey. New Guinea subspecies generally smaller and darker below.

Western Palearctic: a common and widespread bird breeding from the British Isles and Iberia east to Russia and from southern parts of Norway, Sweden and Finland, south to the Mediterranean. Also breeds on the Balearic Islands, Corsica and Sardinia, Sicily and Cyprus. 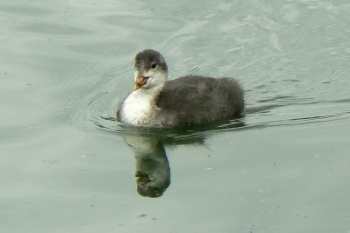 A very local breeder in northwestern Africa and the Nile Delta, in Turkey and the Middle East, has bred in the Canary Islands. Populations in the north and east are migratory, the remainder are resident, dispersive or partially migratory. More widespread in southern parts of the region in winter. Regular winter visitor to the Azore Islands (has bred) and the Canary Islands.

Asia and Australasia: Found in much of the region with northern populations being migratory.

Vagrant north to Svalbard, Iceland (has bred) and the Faroe Islands. 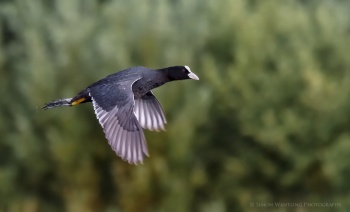 Breeds on lakes and large ponds, frequently on reservoirs, gravel-pits and ponds in urban parks and also slow-flowing rivers. In winter often moves to larger; more open waterbodies, estuaries and on occasion, the sea. Not shy and frequently feeds in fields.

Although they are omnivorous, they have a mainly vegetarian diet consisting of seeds and shoots of aquatic (occasionally terrestrial) plants.

Some individuals lay extra eggs in the nests of other Eurasian Coots (Conspecific brood parasitism). After breeding, this species has a period where moult makes the birds unable to fly3.

Recording by Alok Tewari
Keoladeo National Park, India, Dec-2016
Members of a feeding group in the morning with two different types of calls. Also heard are brief calls by Oriental Darter (twice), Red-wattled Lapwing (once) and Oriental Magpie Robin (whistle-like, once), in this soundscape.

Search for photos of Eurasian Coot in the gallery