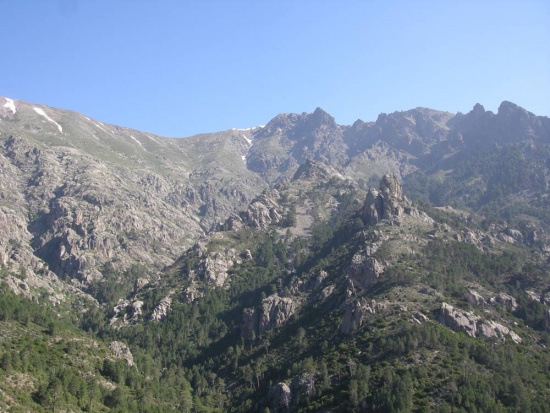 Corsica is the fourth largest island in the Mediterranean with 8,680 sqkm. It belongs politically to France, the official language is French but many people speak Corsu. The island is rather mountainous with the highest peak beeing Monte Cinto with 2706m.

The island is not rich in species but holds some endemics and endemic subspecies which are of great interest. Best of all is of course the Corsican Nuthatch, endemic to the Corsican pine forests in the mountains. The Corsican Finch is often regarded as a subspecies of Citril Finch. Marmora's Warbler is another mediterranean endemic found here.

The mountains still hold some breeding Lammergeier, on the west coast Osprey can be found, Audouin's Gull is quite common in some places. Around the coast Shag, Cory's Shearwater and Yelkouan Shearwater can be found. California Quail is introduced on the east coast. 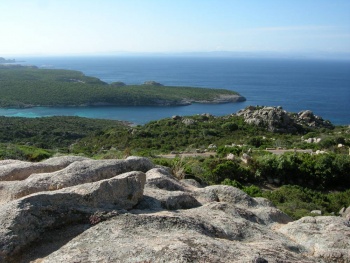 Photo by Wintibird
The south coast, May 2009

The mountains are most interesting for the Nuthatch and other mountain species. There are several good areas like Vallee de la Restonica, Varghello Valley, Col de Sorba or Haut Asco.
The west coast has some good migration points (like Capo Rosso) and the famous Scandola Nature Reserve with its Ospreys.
The east coast has the least attractive landscape but holds some good areas for waterfowl and migrating birds like Biguglia Lake, Etang de Diane and Etang d'Urbino.
Cap Corse in the north is a migration hotspot and Bonifacio in the south is a good place for Marmora's Warbler and has a stunning landscape.

Corsica can be reached by plane (airports in Ajaccio, Bastia and Figari in the south) or by ferry (from Marseille, Toulon, Genova, Livorno or Sardinia). An alternative is to fly to Sardinia, hire a car there and take the ferry from Santa Teresa di Gallura to Bonifacio. Public transport on the island is poor but some areas can be reached by train or busses, altough they run only once or twice a day, so much more time is needed. Generally a car is best to reach most places. Cars can be rented in ports and airports with all major rental companies present.
There are hotels in all Corsica's major towns and on the countryside but they are generally expensive. A package deal to one of the more popular resorts may be a cheaper alternative. Many campingsites also rent bungalows which are much cheaper too.
Food is more expensive than on the French mainland as almost everything has to be imported from there.

The mountains can be dangerous. The weather can change rapidly and it's very easy to get lost in fog or even snow! Prepare yourself well, don't go alone and take a map with you!