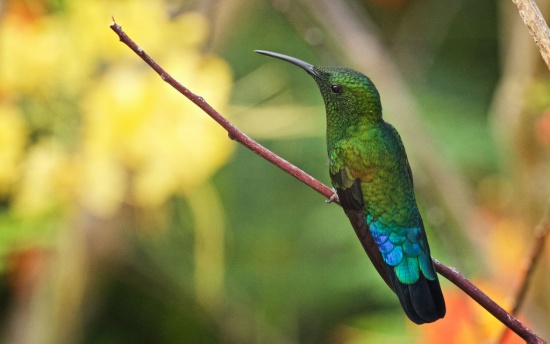 10.5-12 cm, with little or no difference between sexes.
Upperside is green with blue outer uppertail coverts but green central uppertail coverts; sometimes, a bluish sheen can be seen on outer tail feathers. Underside has an iridiscent green throat and upper breast, followed by a narrow blue band, and the rest of the underparts are black. (Whereas the iridescent areas on some hummingbirds looks black in some angles of light, the throat area of the Green-throated is always green regardless of the light). The bill is black and somewhat down-curved. In Dominica some individual birds have single white feathers or even a white spot around the leg. 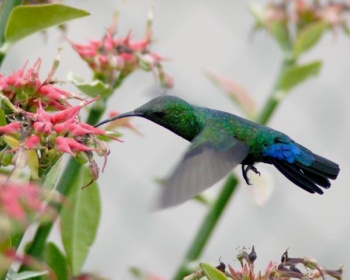 This is one of the species of hummingbirds where one sometimes will see a bird with part of the plumage colored by the pollen from a flower. Examples include a bird with the crown having an oval yellow area, and different birds with yellow instead of green throat area.

Endemic to the Caribbean where it is found from Grenada north throughout the Lesser Antilles and into Puerto Rico of the Greater Antilles. 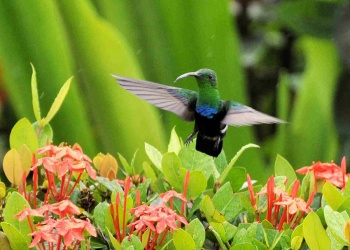 Rainforests, gardens, and other places with flowers at all elevations.

All Lesser Antillean Hummingbirds will take insects in addition to feeding on nectar.

Search for photos of Green-throated Carib in the gallery