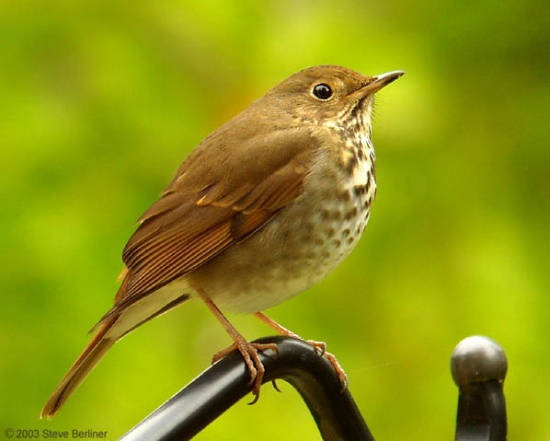 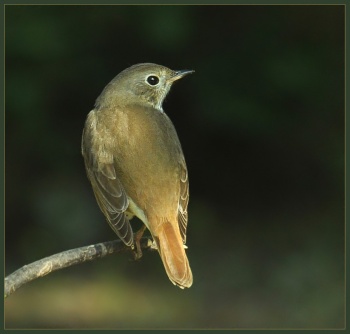 16–18 cm (6¼-7.5 in)
Small. As with other Catharus thrushes, underwing has white dark white pattern. Breast only sparsely and sparingly spotted, but spots are large. Flanks usually entirely unspotted. Grey-brown above, with rusty-red tone to rump and tail (like Nightingale, but is slightly bigger, more compact and shorter-tailed than that species, besides other plumage differences). White eye-ring.

Breeds in southern Alaska and across Canada to Newfoundland, south to California in the west and Maryland in the east.

In the Western Palearctic recorded in Iceland, the British Isles, Sweden and Germany, as well as 3 old records from Luxembourg. British records mainly on Shetland and Scilly in October but also recorded in spring. 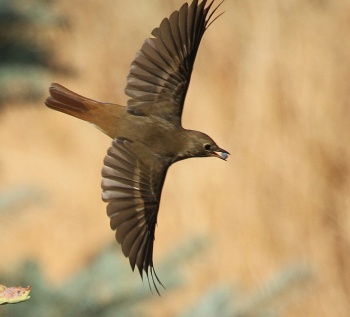 This is a polytypic species, consisting of 9 subspecies1 (although more are recognized by other authorities)2:

A study shows genetic divisions within this species possibly indicating a future split3.

Coniferous and mixed forest from wet lowlands to 300m in mountains. In winter often in drier situations, also gardens and town parks.

During spring and summer their diet consists mainly of insects such as beetles, caterpillars, bees, ants, wasps, and flies. In the autumn and winter they switch to fruit and berries.

The nest is built by the female and generally placed either in a low bush or on the ground. It is constructed from grass, leaves and pine needles; lined with soft plant materials. The clutch consists of 3-6 pale blue eggs which are incubated for 11-13 days; fledging occurs after about 10-15 days. There may be a second brood.

A very musical sound that is one of the most beautiful bird sounds in the world. Sounds like an unknown musical instrument.

Search for photos of Hermit Thrush in the gallery

Search for videos of Hermit Thrush on BirdForum TV