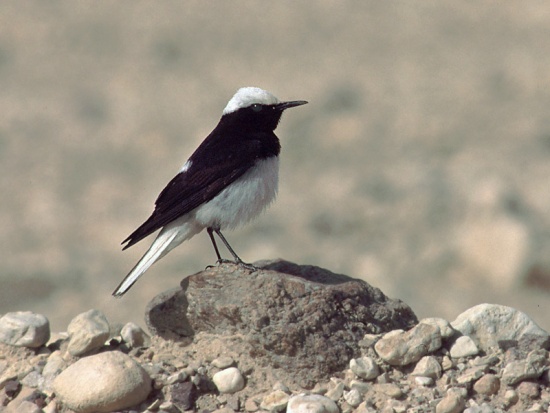 15.5-17 cm.
White crown and belly, black face, back and throat. The tail and rump are white with black central tail feathers.
The female is brown, becoming somewhat paler below.

Eastern Egypt (east of the Nile) east through southern Israel and Saudi Arabia to Iran and southern Pakistan. 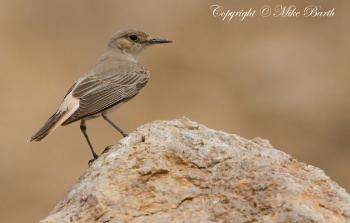 Formerly classed as a member of the thrush family (Turdidae), but is now (along with other wheatears and chats) considered to be an old world flycatcher (family Muscicapidae).

Thinly vegetated desert with or without scattered shrubs. Often found in hotter, more arid sites than other wheatears[2].

Hooded Wheatear feeds on insects, often taken in the air. Its call is a whistled vit, and the song is a harsh chattering. The nest is built in a rock crevice, and 3-6 eggs is the normal clutch.

Search for photos of Hooded Wheatear in the gallery