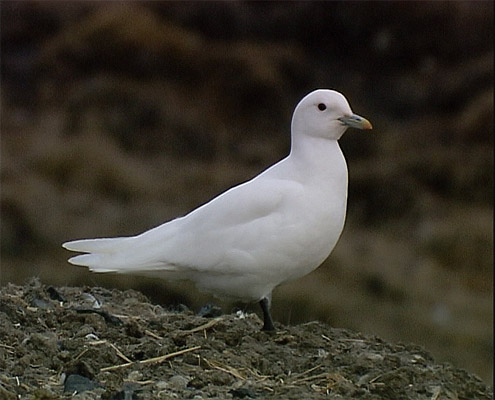 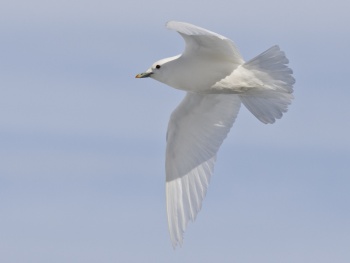 Adult winter Mediterranean Gull can look almost as white from below in bright light, but has dark red bill and legs, and pale grey mantle obvious from above. Iceland Gull and Glaucous Gull are both substantially larger. 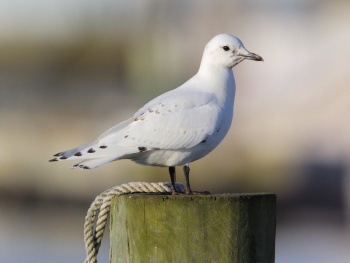 Juvenile; a pale individual. Most are more spotted than this
Photo © by bobsofpa
Cape May, New Jersey, USA, December 2009

Found in Arctic seas and pack ice. Breeding range at 73°-83°30'N, from northern Siberia (New Siberian Islands, Severnaya Zemlya, Novaya Zemlya and Franz Josef Land) west to Svalbard, Greenland and northern Canada (northern Baffin Island and Queen Elizabeth Islands). Spends most of the year along the ice edge. In winter concentrations of this species occur in Labrador Sea along the ice edge of Davis Strait. Some also winter in Bering Sea.

Population status poorly known as the status in northern Siberia is largely undocumented. Greenland may hold 350 to 1350 pairs, the eastern Canadian Arctic as many as 1500 pairs. Most colonies in Svalbard have declined or disappeared. However, it is unclear whether this reflects a widespread population decline, or a shift in colony sites. Total population estimated to be 25,000-35,000 birds.

Short breeding season from late June to August. Does not breed when food conditions are bad. Breeds in loose colonies of 5 to 60 pairs, sometimes more; rarely solitary. The two olive eggs are laid in a ground nest lined with moss, lichens or seaweed. The nest is placed on a bare, snow-free rock behind some shelter.

Spends all year along the ice edge. Disperses in summer north of breeding range into the Arctic Ocean pack ice. Outside breeding season still along ice edge and only occasionally further south.

Search for photos of Ivory Gull in the gallery