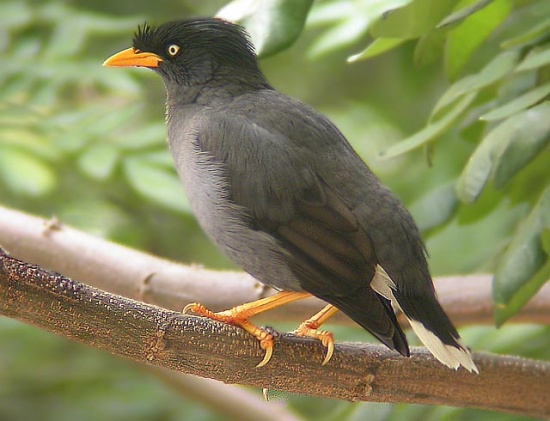 21cm. A blackish Myna with a prominent frontal crest. 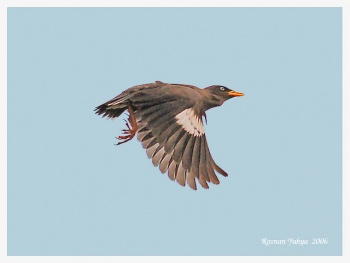 Great Myna is larger, has a larger crest and reddish-brown eyes, Crested Myna has blackish undertail-coverts (sometimes with white tips), a larger crest and a paler yellow bill. Jungle Myna is more greyish and has a bluish bill base.

This is a monotypic species.
This species has been involved in several rounds of splitting. It has been considered conspecific with Great Myna and Pale-bellied Myna. Together with the latter it has also been included in Jungle Myna. The name usage is somewhat confused; see the disambiguation page for White-vented Myna.

Omnivorous. Feeds on fruit, nectar, insects, other animal matter and human refuse.
Forages on the ground, often in pairs or small groups.

Now breeds throughout the year. Prior 1940 breeding was recorded from April to May and in September in Java. A monogamous species. The nest is placed in a tree hole or in a palm crown. Lays 2 - 5 eggs.

Search for photos of Javan Myna in the gallery

Search for photos of Javan Myna in the gallery