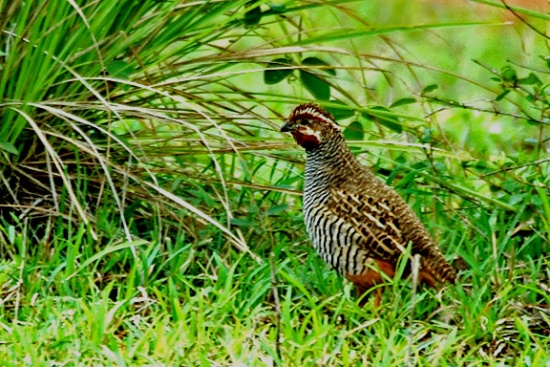 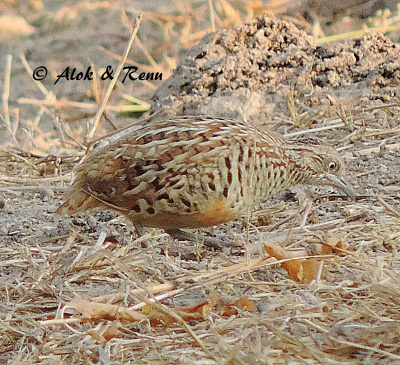 Juveniles have no rufous on face and a broad pale supercilium.

Very similar to Rock Bush Quail but with more contrasting markings. Rock Bush Quail lacks the white bordering above the rufous stripe above the broader and paler eyebrow. There is also no distinct brown cheek patch and little or no black splotching or white streaks on upperparts.

Found in India and Sri Lanka.
Introduced on Reunion Island (where still found) and Mauritius Island (where extinct).
Locally common but also declining in other parts of its range (eg Sri Lanka).

vellorei is not listed in Clements.

Brush habitats and dry scrub. From grasslands to rather dense deciduous forest.
Occurs up to 1250 m, recorded up to 1500 m in Western Ghats.

Feeds on seeds and some insects.
Forages in coveys of 6 to 25 birds.

Breeding season at the end of the rainy season. A monogamous species. The nest is placed on the ground in cover. Lays 5 to 6 eggs.

Search for photos of Jungle Bush Quail in the gallery