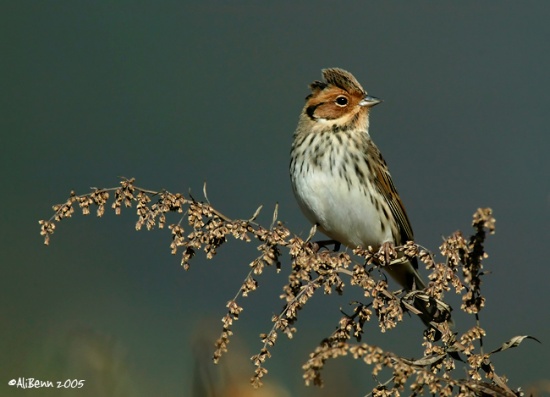 12–13·5 cm (4¾-5¼ in)
This is one of the few buntings which doesn't acquire strikingly bright colours - even in the breeding season.
Summer-plumaged males can be recognised by their rusty-coloured cheeks and neat black head and face markings.
This pattern is more subdued in females and immatures in which other features, such as the white eye-ring and narrow grey bill, become important field marks. Notice too that there are no dark lines running down from the bill, so the male Little Bunting has an 'open-faced' appearance. Females and immatures do have a weak malar stripe but still don't look as strikingly moustached as a Reed Bunting. Other features include the small, conical bill and two distinct greyish wing bars

Common breeder over much of Siberia but rare in extreme west of range in the Western Palearctic. Breeds in the extreme north of Norway and Sweden and in Finland mainly in eastern Lapland, also on the Kola Peninsula and in northern Russia from the White Sea eastwards north of about 60N.

Leaves breeding areas in late August-September to winter from Nepal to southern and eastern China, returning May-early June. Regular in small numbers in Western Europe and annual in Britain with 10-30 recorded most years, although more than 50 have occurred with the majority in autumn. Wintering has occurred. Most records come from the Northern Isles with smaller numbers on the east coast.

'Vagrant to most European countries north to Iceland and west to Portugal, the Canary Islands and Morocco, also recorded in Sardinia, Hungary, Turkey, the Middle East and Egypt.

During the breeding season they eat seeds and invertebrates, such as mayflies and stoneflies.

Search for photos of Little Bunting in the gallery

Search for videos of Little Bunting on BirdForum TV