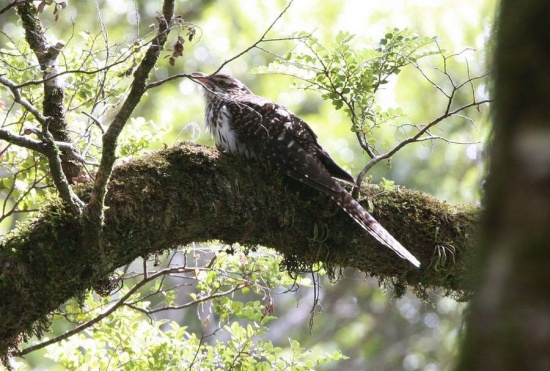 Breeds in New Zealand, Kapiti, Great and Little Barrier, Stewart and Chatham Islands and Kermadecs.
Migrates to Oceania, found in non-breeding season in Palau, Carolines and Marshalls through Fiji, Tonga and Samoa to Cook, Society Islands, Marquesas nd and Pitcairn Islands. Also on Bismarck Archipelago, Solomons, Vanuatu, Norfolk Island, Lord Howe Island and on various other islands.
Population decreasing due to loss of habitat and decrease of host species.

This is a monotypic species which some authorities place in genus Eudynamys. Originally: Cuculus taitensis Sparrman, 1787, Tahiti.

A brood parasite. Breeding season from November to December. Known hosts are Yellowhead, Whitehead and Brown Creeper. The nestling evicts the other eggs and youngs.

A long-distance migrant.
Arrives in breeding are in October, departs in January or February. Immatures stay in non-breeding areas, they return to New Zealand in their second year.

Search for photos of Long-tailed Koel in the BirdForum Gallery