The Chatham Islands are a grouping of 11 islands, with a population of approximately 600 people according to their 2013 census[6], in the South Pacific Ocean approximately 800 km/ 497 miles east of New Zealand. There is no cell phone coverage here.

Their economy is centered on fishing, farming and tourism with most land either privately or Crown owned with habitat ranging from sandy beaches, to volcanic peaks, wetlands and waterways.

A unique claim they maintain is, due to their geographical location, they are the first to greet each new day. [4] 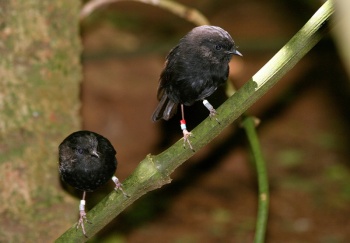 When it comes to birds, the Chatham Islands are recorded as having had 179 species reported as sighted, 1 breeding endemic species, 33 globally threatened and 6 now considered extinct. [3]

The Black Robin, is an endemic that, while suffering from a reduction in habitat and numbers, is the subject of efforts to try to reverse that trend. [7]

Some of the other endemic species you might see here include the New Zealand Scaup, Spotted Shag, Tui, Gray Gerygone, Chatham Island Gerygone, New Zealand Fantail, Tomtit, and Eurasian Skylark. [3]

These islands have a long, storied, and interesting past.

They were first settled over 800 years ago by the Moriori people, an influence still present here today. After they came, the Europeans appeared with their influence. Followed by the Maori, who invaded in 1835, and still have a bearing on the island. All of these cultures and influences have combined to form what has been called a Chathams culture.[4]

Some of the locations of particular interest to a birder could include the Awatotara Bush Coastal Walking Track, Henga Scenic Reserve, Nikau Bush Conservation Area, and Pitt Island.

Chatham Islands / Tuuta Airport (CHT), is the airport on the islands, but mainstream commercial carrier access may have to be through an airport on mainland New Zealand.

Search for photos of Chatham Islands in the gallery