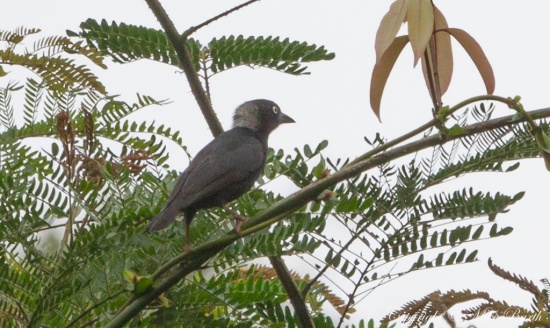 Sexes similar. Juveniles are dark brown to blackish above without gloss and dull charcoal-grey on underparts.

Found in lowland evergreen forests and secondary forest, often near rivers and creeks.
Occurs mainly in lowlands, up to 850m in Cameroon.

Assembles at noisy, large roosts in the evening.

Breeding season differs through range. Probably a polygynous species. Breeds in colonies with 20 to 500 nests, sometimes in mixed colonies with Vieillot's Black Weaver and Village Weaver, less often with Orange Weaver.
The nest is a rough ball with the entrance below and almost no tunnel at entrance. It's made of thin creepers or woven from strips of banana. It's placed at the tip of a pendulous branch generally high in the crown of a tree, more than 10m above the ground.

Search for photos of Maxwell's Black Weaver in the gallery