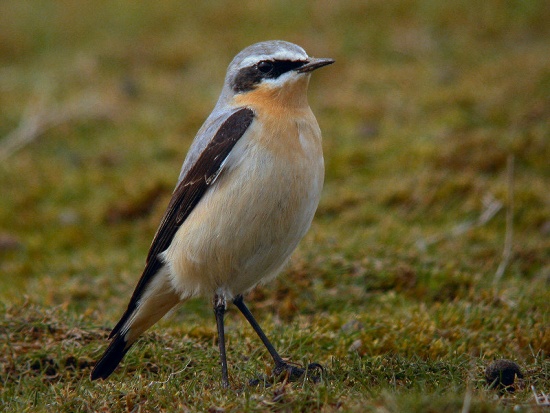 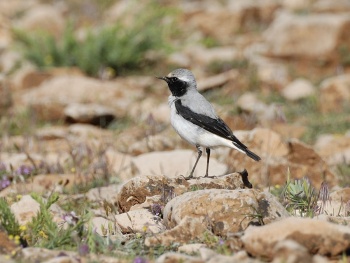 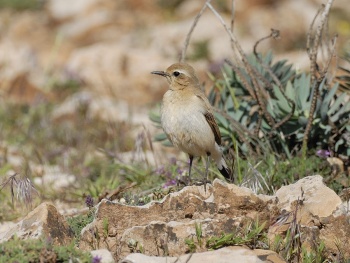 Europe, Asia, Africa, North America and Greenland.
Europe: Breeds in most of Europe including for example Iceland and the Faroe Islands, in the south only at higher elevation. These populations winter in Africa.
North America and Greenland: Populations breeding in Greenland and eastern Canada migrates to Africa (via western Europe). Populations breeding in Alaska and northwestern Canada migrate by a western route through Asia and the Middle East to eastern Africa south of the Sahara. Both of these populations give rise to vagrants seen further south in the Americas and The Caribbean.
Asia: Breeds across the entire northern half of the continent, migrating to sub-Saharan Africa.
Africa: As long as the taxon O. o. seebohmi is considered part of Northern Wheatear, there are breeding birds in the Atlas Mountains of northwestern Africa. Africa is important as the winter range for almost all populations, in a broad belt from Senegal east to Sudan and south in eastern Africa to Zambia. A few also winter in southwest Asia.

Wheaters were originally classified in the thrush family Turdidae, but is now considered to be Old World flycatchers, family Muscicapidae. This thread discusses aspects of Northern Wheatear taxonomy.

North-eastern Canada to Greenland and Iceland; migrates through western Europe to western Africa.[3][5][7] Slightly larger and more orange-toned below. 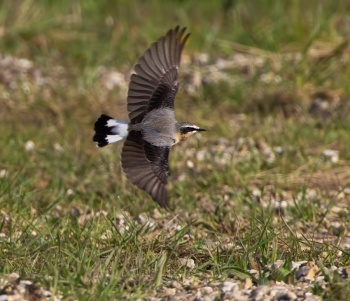 Male in flight
Photo © by targetman
Lincolnshire, UK, 9 May 2012

British Isles to Mediterranean, Siberia and Alaska; migrates to central and eastern Africa. The migration from Alaska to East Africa is the longest known migration of any songbird.

Southern Spain and Balearic Is. to Iran, Kazakhstan and Mongolia. Marginally paler and longer-billed.

Diet consists mosly of insects such as beetles and ants, also some berries at times. 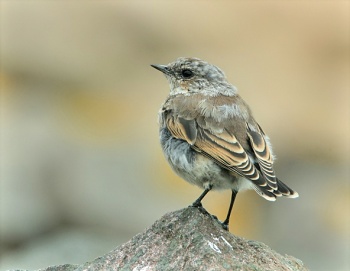 Nest is on ground on dry tundra, usually in hole in a wall, under stones, or in old rabbit burrow. and is a cup of grass, twigs, weeds, lined with finer material such as moss, lichens, rootlets. The clutch is usually 5-6 pale blue eggs; unmarked, or with fine reddish brown dots, which are incubated by the female for 13-14 days.

Song usually in up to 3 sections. First section has 1 or 2 notes, second has 2 or 3 but up to 10 rapidly repeated notes; third section tends to be quieter, is often a repetition of first section. E. g. in the song phrase zee zee widdle ee, the first and third sections are high-pitched zee or ee notes. Call is a straight whistle. Northern Wheatear voice clip 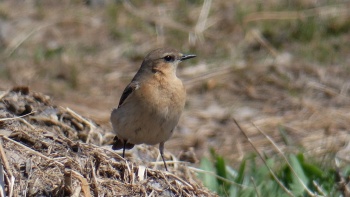 Search for photos of Northern Wheatear in the gallery