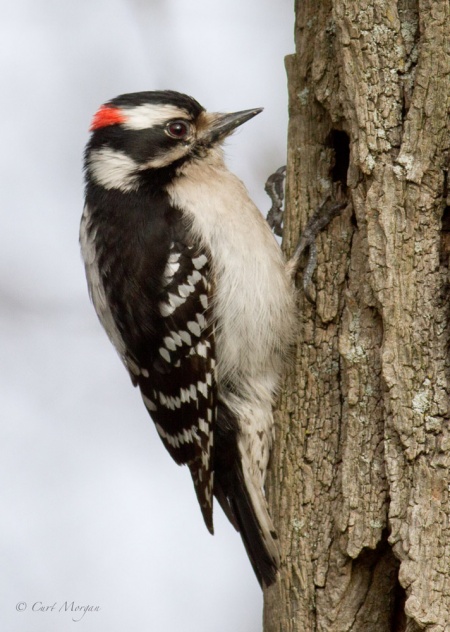 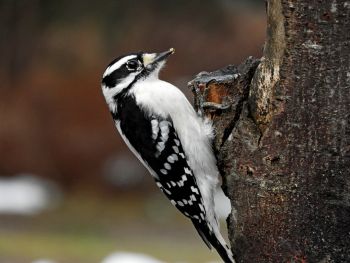 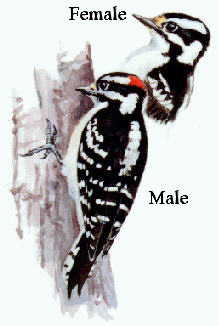 Hairy Woodpecker has a proportionately larger bill than Downy Woodpecker, that is about the same length as the head.


Downy Woodpecker has a much smaller, stubbier bill. Hairy Woodpecker lacks dark markings on its outer tail feathers that the Downy has. (This field mark is less useful in the Northwest where darker races of both species exist and these marks are usually present). Hairy usually has a black dividing line at the rear through the red (male) or white area just below the crown, while 99% of Downy Woodpeckers lack that dividing line[2]. 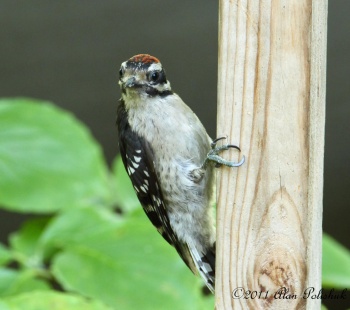 Resident from Alaska across Canada, south throughout United States except Southwest. Can also be found east of Newfoundland and Labrador, on the islands of Saint-Pierre and Miquelon. 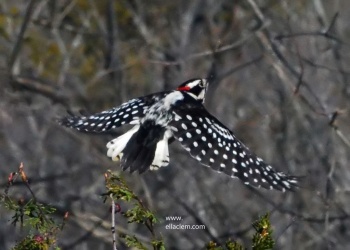 Placed in genus Dryobates by Gill and Donsker. 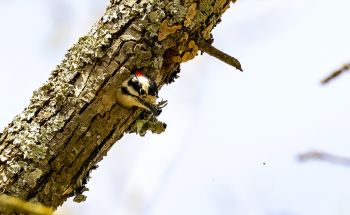 There are 6 subspecies[1]:
Eastern

Their breeding habitat is forested areas, mainly deciduous, across most of North America to Central America.

The Downy is a familiar bird in its range, especially in winter, when many move into the suburbs and feed on suet at bird feeders. It is often seen in the mixed flocks of chickadees, nuthatches, creepers, and kinglets that gather in the woods during migration and winter.

As with other woodpeckers, the male is larger than the female and chisels deep into wood with its longer, stronger bill, whereas the female pries under the bark with her shorter bill. Thus a pair is able to share the food resources without competing with one another.

They nest in a tree cavity, excavated by the nesting pair in a dead tree or limb.

A quiet pik or a descending rattle. Both sexes drum on trees to claim territories, attract mates, and signal readiness for mating. The drumming is very rapid and steady, almost rendering into a single uninterrupted sound.

Resident in most of range. Northern and montane populations are partially migratory or disperse over longer distances.