North Carolina, also known as “The Old North State” and “The Tarheel State” is a long state. It’s been said it stretches approximately 500 miles between its eastern and western boundaries and close to 150 miles from its northern to southern borders. It's divided into three primary areas. From the coast, you have the Eastern North Carolina portion, the Piedmont Region in the middle, and Western North Carolina with it's mountains at the western end.

If you begin your journey from the far eastern portion, you will start at the ancient, sandy, dune laden barrier islands of the Outer Banks where one of the earliest attempts at settlement by English speaking people occurred, cross navigable sounds and tributaries and through lowlands with stands of pines, across forests of hardwoods in the Piedmont, and on into the mountains of the western part of the state.

Along this journey, you will find places frequently visited by migratory flocks of birds, through areas of wetlands and forests with yet other species of birds and wildlife. Continue on through the piedmont with its river basins, and into some of the oldest, and tallest, mountains to be found in the eastern part of the United States. Across this entire expanse, expect to find many different types and species of birds and wildlife. Some here from the beginning and some once thought to be gone that are being reintroduced such as Elk and Wolves.

North Carolina offers many unique, and varied, opportunities to enjoy nature and add to your birding life list. It is truly a land of variety. 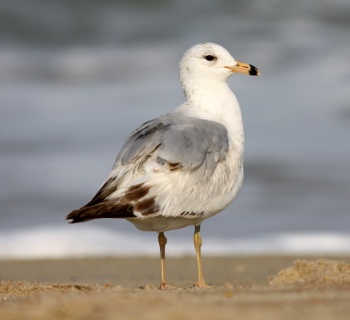 For a state with 481 different species of birds reported according to eBird [1], it’d be very hard to pin down just a few “notable” species. The sheer volume of species seen is notable in, and of, itself. To give you an idea of a cross-section of birds that have been found to be present in North Carolina consider these, as reported to eBird.

Along the Outer Banks, in Dare County, the Tree Swallow and Snow Goose are the top two reported species

Moving into the Piedmont Region of North Carolina you will find the Red-winged Blackbird, as well as the Common Grackle, is abundant in the northern Piedmont county of Caswell. In the southern portion county of Stanly, the Ring-billed Gull and American Coot have been seen in abundance.

And the mountainous, Western North Carolina region’s Ashe County, the Common Grackle has again been an abundantly seen species as has the European Starling. Rounding out this end of the state, two abundant species seen in Swain County are, once again, the Red-winged Blackbird. Along with that is the American Robin.

This includes but 7 of North Carolina’s 100 counties spread from the ocean to the mountains.

Search for photos of North Carolina in the gallery