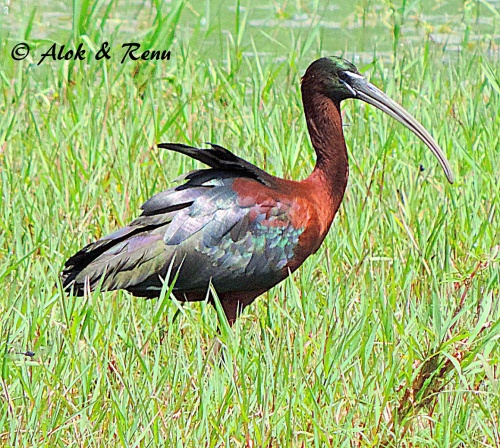 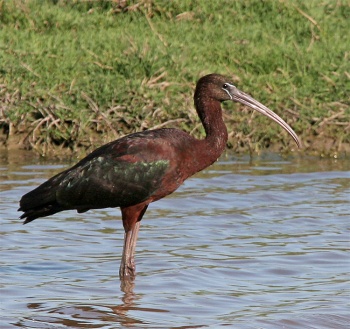 Breeding adult: Body reddish-brown and wings glossy bottle-green. There is a narrow white to cobalt blue line around the base of the bill.

In winter plumage, can be difficult to separate from White-faced Ibis (P. chihi) without close views. Best told by dark eyes and lores (red in White-faced) and narrow bluish-white stripes of even thickness above and below the lores (absent or uneven in winter plumaged White-faced).
Immatures almost impossible to separate except when showing diagnostic adult-type facial pattern. Further identification problems compounded by an increasing amount of hybridization between the two.

This bird is found almost world-wide but they are uncommon in some places; they are listed as rare or vagrant in many places, such as Borneo, Singapore, etc.

There is evidence to suggest that some groups are migratory with palearctic individuals making their way to Africa to over-winter.

In North America the species occurs almost exclusively along the Atlantic Coast, though there is a disjunct population at Horicon Marsh. The population in North America has been spreading in recent years. Wintering birds are now turning up regularly in northern Central America, where they were not recorded previously. However, at least two ringing recoveries shows vagrants from Europe reaching the Caribbean. See also discussion under "Movements" below. 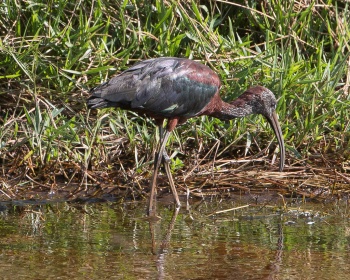 These birds are gregarious and may occur in large flocks containing hundreds of birds often flying in formation.

The nest is a compact platform of twigs or reeds, about 30 cm diameter, usually in a tree which overhangs water. Nesting is colonial and often in mixed heronries. Two to four eggs are laid August to March (in southern Africa). Incubation is by both sexes and takes 20-23 days. 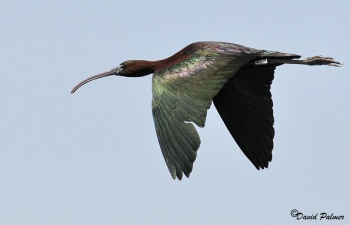 Highly nomadic. Migratory and dispersive with adults and young dispersing often in separate flocks in all directions resulting in frequent records north of breeding range and of vagrants far from colonies including New Zealand, New Caledonia and The Seychelles. American populations are descended from immigrants from Europe that first arrived in the 1880s. Some recent transatlantic movements include birds ringed in Spain showing up in Bermuda and the Caribbean.

In the USA vagrants have occurred well west of breeding range all the way to California.

Search for photos of Glossy Ibis in the BirdForum Gallery

Search for videos of Glossy Ibis on BirdForum TV