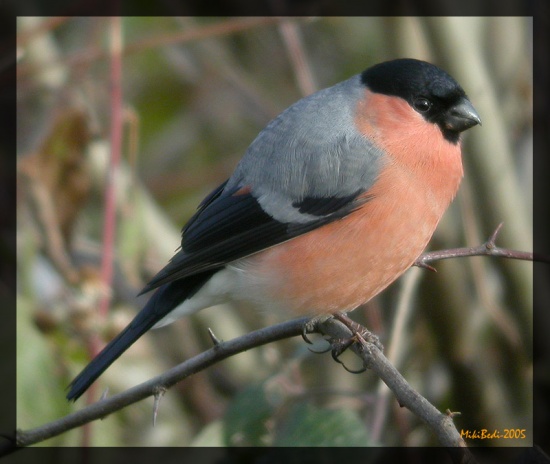 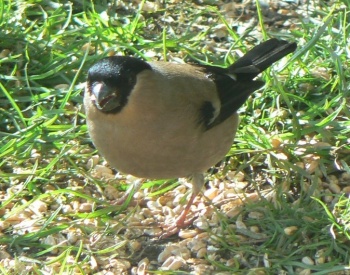 Similar to females, but do not acquire the black cap until after their first moult

Widely distributed and common over much of range. Breeds throughout the British Isles and France, northern Spain east across Europe to the Urals including much of Scandinavia except the far north and higher mountains and north to the White Sea in Russia. Breeds south to the Mediterranean coast of France, northern Italy and the Balkans, northern Turkey and the Caucasus.
The range continues through Siberia to Manchuria (China) and northern Japan.
Migratory in far north of range, partial migrant or resident elsewhere, migrants move southwards in Oct-Nov, returning Mar-Apr. More widespread in winter, especially in Iberia, south and South-East Europe and Turkey.

Azores Bullfinch was formerly included in this species. 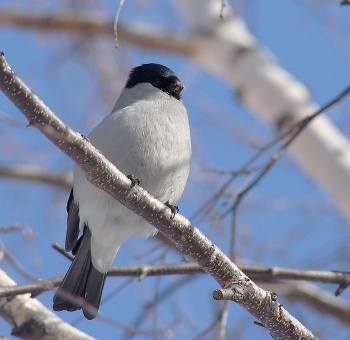 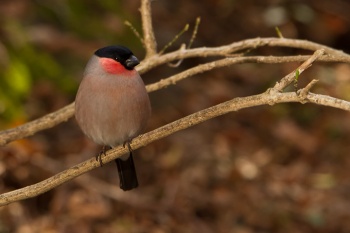 Subspecies rosacea is not accepted by all authorities[2] 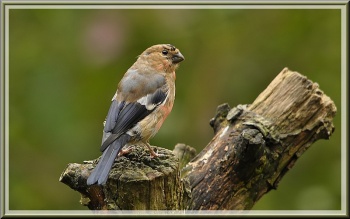 Woodland and open forest, usually deciduous but also coniferous in the north. Also on farmland with copses and hedgerows, orchards, gardens and town parks. Generally shy and secretive.

The flight is undulating.

Bullfinches have a broad diet, consisting mainly of the seeds and berries of a variety of plants. When these are scarce during the spring they turn to the buds of fruit trees. When bullfinches occurred in higher numbers they were considered to be pests of orchards.

Nests are built in dense hedges and woods between four and seven feet from the ground. Fine twigs, moss and lichens are used to construct the main body of the nest and a lining of fine roots is added. In May 4-5 pale blue spotted eggs are laid, the female incubates the eggs for 12-14 days after which both parents feed the chicks. A further 12 to 16 days later the chicks fledge. A second brood is then usually produced.


Family group of adult & juvenile Bullfinches calling to each other
Leeds, Yorkshire, August 2016
Recording by Chris-Leeds

Search for photos of Eurasian Bullfinch in the gallery