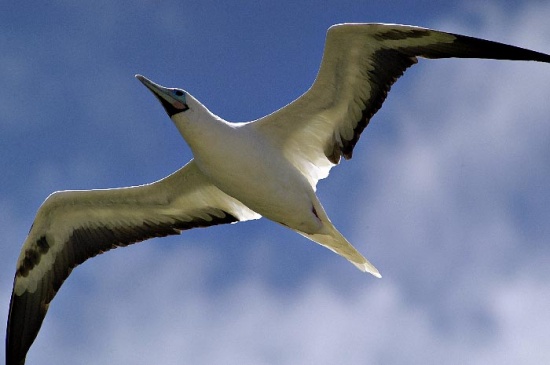 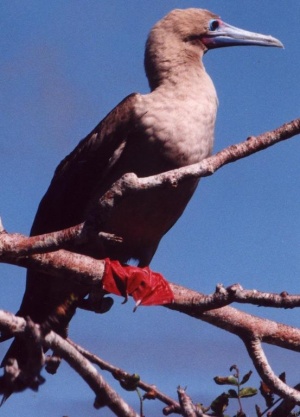 Fundamentally similar to the brown phase except that the entire tail, undertail coverts, and uppertail coverts are white.

Some Pacific populations have most of the tail black, while in the Caribbean and around Australia, the tail is white.

Birds are similar to the brown color phase, but lack the pink base to the bill. They start out with the bill all gray and feet that are dusky to orange; the bill then turn two-colored with dark tip and lighter inner part that may be fleshy. The juvenile also have the head and neck lighter than the upperside of the wing, and compared with e.g., juvenile Brown Booby has darker underwing lacking the white areas seen in the latter.

This is a pan-tropical species with nominate subspecies breeding in the Caribbean (only white and brown with white tail) and off Brazil, with rubripes breeding in the Pacific and Indian Oceans, and websteri breeding off Mexico and Central America.

Pelagic; rarely seen near land except near breeding colonies which are normally situated on small islands.

May breed in any month with nests situated in trees and bushes, rarely on the ground.

It is a strong flyer which rarely dive vertically but instead often flies into a wave or hit calmer water in a shallow angle. May also catch flying-fish above water.

Search for photos of Red-footed Booby in the BirdForum Gallery