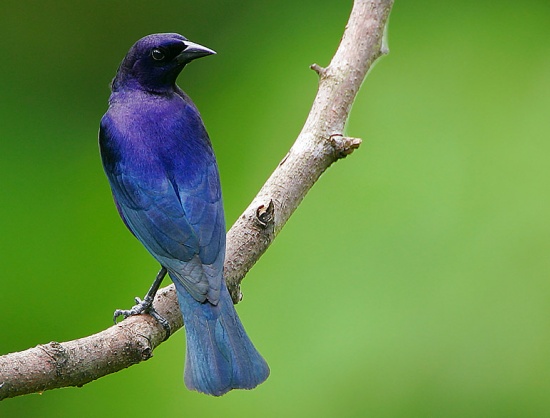 Male
Photo © by Steve G
Asa Wright Centre, Trinidad.
(Picture shows a bird much bluer than I have ever seen, possibly due to special light effects; use the gallery link below to see the variation in this species)

Carib Grackle differs in having pale eye, longer bill, and keel-shaped tail, where tail of Shiny Cowbird is flat

Found from south east USA through the Caribbean and South America to Argentina. The spread north from South America started around 1900 and is still ongoing.

Strangely, the species initially did not become established in or completely circumvented some of the islands in the Lesser Antilles including e.g., Dominica, where it is only now starting to appear in numbers (2011-2012). 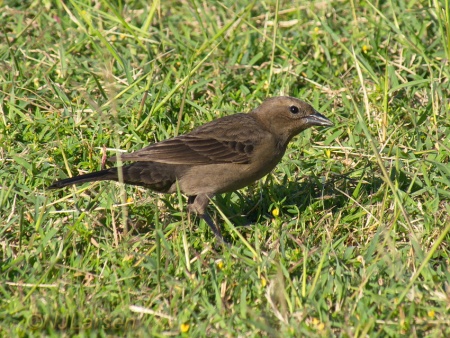 Seven subspecies are found within the range[1]. M.b. minimus is the form that has spread north.

Favours open areas, mostly at lower elevations (at least in the Caribbean)

This species engages in nest parasitism where the female lays its eggs in the nest of other birds, with 250 different species known to have had eggs placed in their nest and almost 100 of these known to have raised young of Shiny Cowbird. In the Caribbean, there seems to be a preference for members of the icterids such as orioles and blackbirds, but in southern South America many different groups of birds are among the known hosts. Shiny Cowbird has caused a decline in several species, and is one of the reasons that the Yellow-shouldered Blackbird is endangered. During egg laying, it is common that Shiny Cowbird puncture or remove at least one host-species egg from the nest.

Search for photos of Shiny Cowbird in the gallery