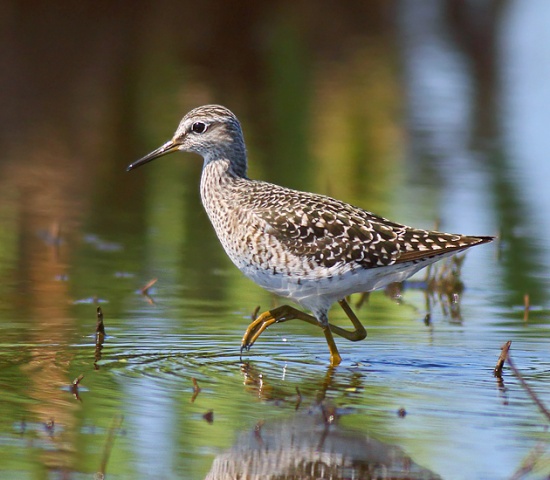 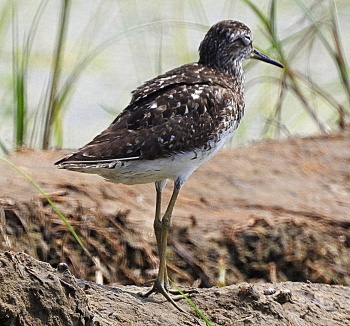 Length 19–23 cm (7½-9 in), wingspan 34–37 cm, weight 34–98 g
A fairly small, long-legged wader with a rather attenuated 'necky' appearance. It has brown upperparts spangled with white, and generally white underparts, with light brown barring or mottling on the flanks and breast.
The most striking plumage features are the buffy-white supercilium, which shows well behind the eye, and the square white rump. The supercilium is defined by a dark brown 'cap' and a bold broad eye-stripe.
The legs are dull yellowish, but can appear quite dark when the bird is feeding in mud, or in dull light. The bill is about the same length as the head, and straight, blackish-brown with a slightly paler greenish-grey base. The head shape is almost squarish in profile, and the neck can be extended or retracted a certain amount, changing the overall appearance. The white rump has a patch between the dark tip of the tail and the back.

Winter plumage and juvenile are similar to summer plumage, but slightly duller; on juveniles the spots on the mantle and wings are pale buff rather than white, and the flank markings diffuse rather than barred. 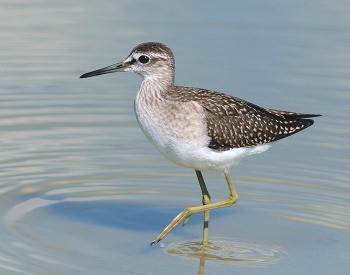 Green Sandpiper is broadly similar but differs in slightly stockier build with shorter neck and legs, more contrasting plumage, darker above and whiter below, and in flight black underwings; confusion is most likely with adult Wood Sandpipers late in the summer which can become very dark above as the white spots wear off. Juvenile Common Redshank is also a frequent confusion species, as it has duller, more orangey legs and a shorter bill than adults. Lesser Yellowlegs has quite similar plumage, though the supercilia are bolder, and its legs brighter chrome yellow. 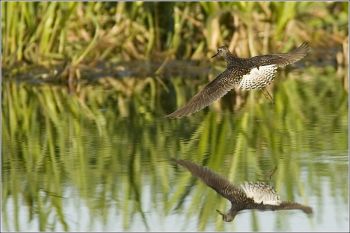 Breeds in northern Europe and northern Asia; winters in southern Africa, southern Asia and Australia; on migration west to Ireland (rare) and Great Britain. A vagrant in North America, most frequent in western Alaska, where annual on migration.

Well-vegetated freshwater wetlands, often in woodland though less tied to forests than Green Sandpiper and common in wet meadows. On passage and in winter at more open pools and marshes on muddy margins or in short wet vegetation. Rarely found in saline or tidal habitats.

Wood Sandpiper tends to be a rather active bird, often found on the margins of quite small pools, or wading hurriedly through the shallows. It often teeters in the manner of a Common Sandpiper, though perhaps not quite so frequently. As it advances it pecks briefly to one side or the other, picking up tiny particles of food from the surface of the mud.

Strongly territorial in the breeding season. Solitary or in small flocks on passage and in winter, though larger flocks may occur in favoured habitats in winter. One of the most numerous waders in the Old World, with a breeding population of several million pairs.

Nests either in a scrape on the ground, or in old thrush nests in trees. The 4 eggs are are incubated for 22-23 days by the female. The young fledge after 29-31 days.

Search for photos of Wood Sandpiper in the gallery