Yesterday (Jan, 21, 2021) I went to a small lake near Reno Nevada called Sparks Marina. Off and on a Juvenile Glaucous-winged Gull has been reported there. During this same time period a Juvenile Thayer's Gull has also been reported. There appears to be disagreement in the local birding community about whether the bird I saw today is a Juvenile Glaucous-winged or a Thayer's Gull. Enclosed are several photos of the same bird on the water and flying. Is there some defining characteristic that suggests it's one rather than the other? Any insight would be greatly appreciated. Kathy 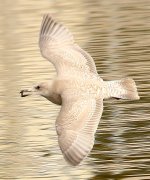 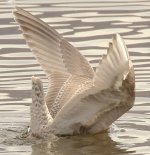 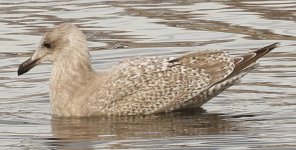 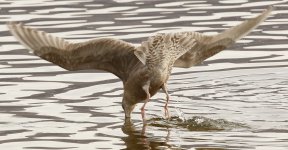 For me this is a Glaucus-winged Gull, or perhaps that with a little mixture of Western Gull genes in its ancestry. Or perhaps some other hybrid combination. The bill looks too large and the forehead not steep enough for a Thayer's Gull.
S

Not Glaucous-winged since the pattern of the outer primaries is too dark and contrasting and the tail pattern is all wrong.
It is either a Thayer's Gull or a West Coast hybrid; I would identify it as the former but choosing between the two seems to be very much a matter of personal preference...

this disagreement in the local birding community actually reflects the difficulties which even the most experienced gull people are facing in the american west, as also stated by Peter (smiths) above. this bird surely is not a glaucous-winged for the reasons he mentioned. now is it a 'giant thayer's' or is it a hybrid? structurally, to me it looks more like a hybrid and then not the coastal 'olympic gull' but (plumagewise) more like a 'cook-inlet gull' (american herring x glaucous-winged). gull folks are debating a lot about this conundrum...
B

This interchange is fascinating and helps explain my confusion. I will continue to watch this post in case anyone else would like to chime in. Lou Salomon is correct, some in the local birding community are calling it a "Giant Thayer's". Kathy
T

Larger gulls = hybrid swarm = call it "a gull". Just sayin'... (Hats off to those who can identify them)
T

I agree that it looks like it could be a GWGUxHERG. For what it’s worth, the head shape is very herring-like in my opinion, and the bill is also quite large. I don’t think it’s reasonable to mark this as a Thayer’s, even if it is one by some off handed chance. It would be better left as Larus sp before assuming that it is an anomaly among anomalies of some species.
S

The thing is: "Herring Gull-like structure", "quite large bill", "forehead not steep enough" - these features are fairly useless, since they are readily shown by Thayer's Gulls on the breeding grounds. 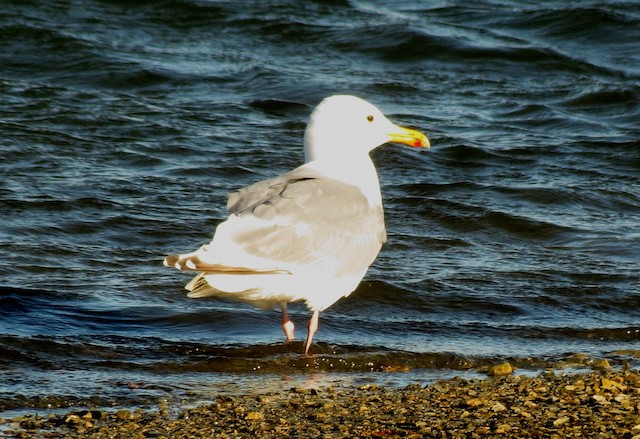 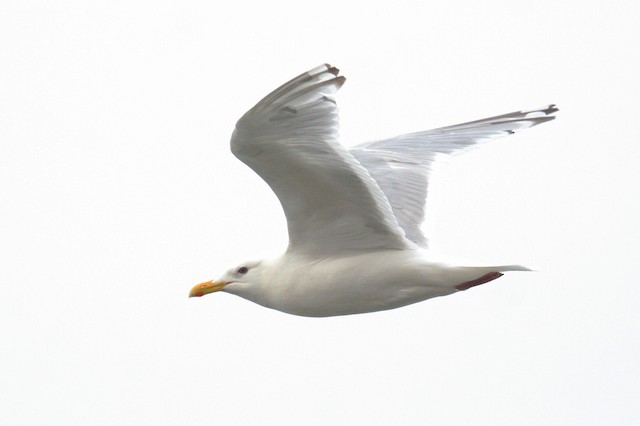 I'm beginning to think I should just post the photos with "Laurus" on ebird so that others can consider what it is. However, for now I will keep checking back with birdforum. Gulls are complicated enough but adding hybrids to the mix makes it even more so. Bottom line is if I state what the bird is on ebird the only vote that counts for acceptance is the person who reviews gulls for Washoe County. Sure would add clarity to have some genetic analysis.
T

smiths said:
The thing is: "Herring Gull-like structure", "quite large bill", "forehead not steep enough" - these features are fairly useless, since they are readily shown by Thayer's Gulls on the breeding grounds.

Do you have a sense for how common it is? This is news to me, having never been to their breeding grounds. I would think (based solely on logic) that something as drastic as structure of the head ranging from small and round to large and flat would indicate mixed genes somewhere along the spectrum. I have to wonder how these birds are being identified to species level confidently. With such ambiguity, even among experts, it sounds like some of them might be called to a species level too quickly. Just my thoughts, not an expert on gulls.
S

On the breeding grounds Thayer's Gull can be identified rather easily since they breed much further north in the High Arctic than most other large gulls (except Glaucous). However, most birders (like me) have studied this species only on its wintering grounds, where it is found in mixed gull flocks often containing a large number of Pacific hybrids. Trying to sort out all of these gulls on the wintering grounds is therefore a bit like stumbling in the dark.