My intention is that this should involve more than Red Foxes this year - though I expect they will still have a significant part to play.... I want to get out and photograph some species I've neglected or which have evaded me for a few years during 2022. Locally I will have time to spend on small mammals and my local Badgers; more distantly its a few years since I managed anything with Chinese Water Deer or Wild Boar. Not to mention rarer mustelids!

2022 didn't quite kick off with my own foxes, mainly because the WWI style bombardment starting at two minutes to midnight scared the living daylights out of Jitter. As he was being supplied with a succession of chicken drumsticks he did his best but one particular series of very loud rockets (he was watching them go up after the first one, my boys and girls don't miss a trick) made him flinch more and more and eventually he made off, hopefully to some refuge where the noise was muffled.

So it was left to an anonymous Red Fox ambling casually along the pavement along Mayfield Road as I headed out at 0610 to pick up Clare to be first four-footed beast on the year list.

During the day we were mainly birding but we had Rabbits on the A3 verge on the way South in the dark, ran across a number of Grey Squirrels in various woodlands and then got really lucky in the afternoon with two winter-coated Fallow bucks - one with really massive antlers - near Eyeworth Pond.

On the way back from getting the Swallow at Sidlesham for a January tick, I dropped into Pulborough Brooks RSPB yesterday afternoon hoping to see their Lesser Spotted Woodpecker but dipped. Happily the local Bank Voles in Fattengates scooted out from under logs a few times to garner bird seed, giving me a couple of decent chances at photos. After that three Grey Squirrels monopolised the area - undesirable invasive aliens they are, but also good photo-fodder!

A good couple of days mammal wise 13 species, but most eluded the camera apart from these rodents. Soprano pipistrelle flying on the 1st was a first. 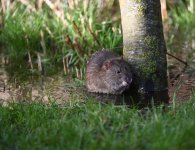 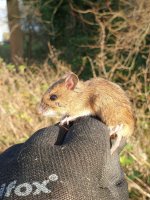 This evening at 2150 Scally became the fourth fox to check in since the turn of the year (Psycho was fed late last night, Hoppity having been present for quite a while early evening while Patch - inevitably - had said hi about 2100 on 1st January.) He had a fair bit of soil on him so may have only just come out of his earth, or have been doing some home improvements. Anyway, he ate one drumstick under next door's shrubbery and took the next off into the night.

Fox number five appeared this morning as I was driving to work: Jitter was scavenging after the bin men and I mean about twenty yards behind the truck, just where Cove Brook goes under Mayfield Road (not very far from my house in a straight line).

There's no doubt in my mind that it was Jitter, it was a big tall rangy dog fox with a huge sweep of brush that had that jaunty upcurve that Big Whitey's always had.... His ears were spread flat so he wasn't entirely at ease but my word he's bold.

This afternoon I took advantage of the glorious sunshine to head for Staines Moor after Water Pipit, only to find the footpath off the concrete track from Stanwell Moor was closed for improvement work! I picked up Ring-necked Parakeet and Fieldfare for the year, but the bonus species was a male Muntjac in the Little Owl paddock - not a great view and only a record shot but a year-tick for all that.

A golden Rabbit at Wilstone Reservoir on the 1st while dipping the Green-winged Teal. 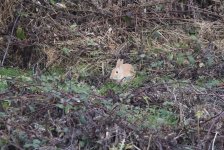 Another January, another decent-sized roadkill Hedgehog on the road not far from me in south Hants, I think that's four years in a row now. Only saw one live one around here last year, not looking good for the species locally.

WalterRayle said:
Another January, another decent-sized roadkill Hedgehog on the road not far from me in south Hants, I think that's four years in a row now. Only saw one live one around here last year, not looking good for the species locally.
Click to expand...

I agree. I hardly ever even see roadkill around Farnborough these days, even when they should be up and about. Numbers are just not there.

I saw more Hedgehogs (including as roadkill) during 2020 COVID in the northern end of Farnborough than I had for years, and even had regular pair under the garden shed into 2021. Remains to be seen how 2022 pans out.

The foxes have been more site loyal than they usually are around Christmas. I mentioned upthread that five of the seven have already checked in this year.

However, this being the peak of the mating season, the boys are pretty pumped at the moment, and I noticed on a pic that Patch had had a fight in which he received a bite that left a groove down the left of his face that just missed his eye and looks like a sabre duelling scar. A possible culprit was revealed the night before last when Scally absolutely assaulted Patch, knocking him over backwards and stealing his chicken. Patch however slipped past him and came to me right on the front step, fetching up within about four feet of me and looking appealingly for a refill, which he got and then ate right next to me where he knew Scally wouldn't dare come. 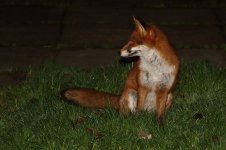 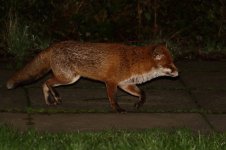 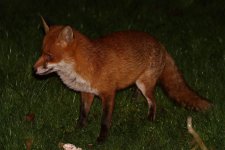 Relocation to Capel Fleet for the afternoon added a nice Short-eared Owl close enough for a decent picture and a Barn Owl hunting for ages but too distant for more than a record shot. The day qualifies for the John's Mammals thread due to a Brown Hare lolloping along a fence line out on the Fleet (rather than the unseen myriad Field Voles being dive-bombed by owls).

An exceptionally slow start to the year mammal-wise (just grey squirrels, including black squirrel, and a distant roe deer), but hoping to kick-start things with a mooch around the Forest of Dean this weekend...

Walking into work from the car park on one of my last days in the office (the very last was yesterday though technically I am still employed till the end of the month) I saw a Bank Vole run from the little shrubbery on the left of the tarmac path, to the building side of the accessibility ramp up to the door and disappear under the ramp. It must have a hole there. A nice start to the day, though mammal-wise I'd already had a morning visit from Patch and Scally requesting breakfast.

So I'm done now, five extra days a week to do stuff I want to (if I can afford it as a pensioner!)

Congratulations, looking forward to reading how you spend your time.

Final two foxes checked in over the weekend with Rip the elder vixen making her first appearance of the year on Saturday 15 Jan (and a repeat yesterday) and Smudge finally curling his tail over his toes in his characteristic waiting sit on the lawn at about 2100 last night.

Despite a long day out birding, no new mammals and indeed no repeats apart from a Brown Hare that Clare spotted from the car and Steve and I missed.

The hide where I photographed the polecat from a couple of months back in Suffolk will be on winterwatch this week.

bustersymes said:
It took a while but I managed to find this Robin deep in the forest on a frosty dawn earlier in the week
Click to expand...

What he said... excellent pic and a wonderful sighting! I love Robins

I didn't mention that on Thursday I was down at the Burgh in West Sussex looking for farmland birds now difficult or impossible locally. I added Grey Partridge and Yellowhammer to the year list and had some excellent views of Brown Rats feeding under a pheasant feeder, having dug their holes right next to it for the purpose. I'm in favour of farming for farmland birds even when it includes game shooting as part of the business model, but the estate in question kills predators which are legal quarry - I've seen the tunnels where they trap Stoats and Weasels, and they have also been proved to use Larsen traps - but what you get if you kill small predators and provide loads of grain is rats in profusion. It's stupid as well as wrong.