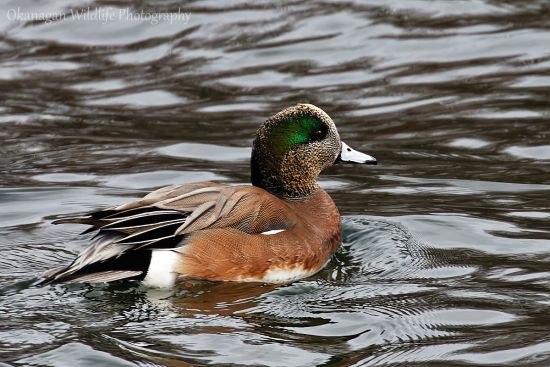 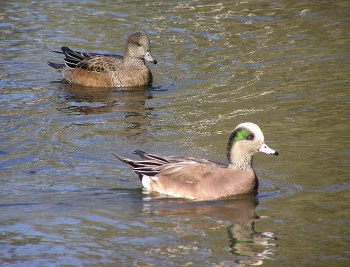 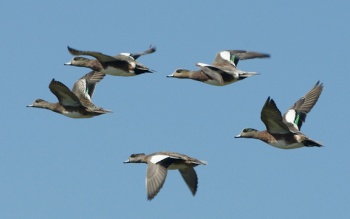 Female: belly white, breast and flanks are light brown (or rust-orange) in contrast to grey neck and head, which mostly shows darker mask around the eye than Eurasian Wigeon. White axillaries and underwing middle coverts as in male; upperside of wing with very dark speculum, brownish-grey secondary coverts that most often are whitish at the rear, rarely just as white as the coverts on a male. 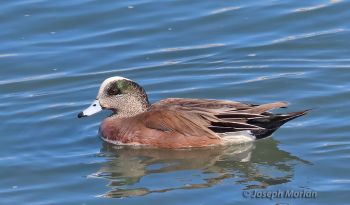 Eurasian Wigeon, Chiloe Wigeon. Eurasian Wigeon has grey axillaries and middle coverts in all plumages (beware of influences of bad light), and less contrast between grey on neck and brownish on body. 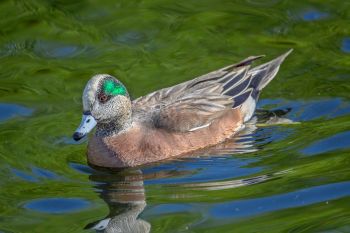 Alaska south throughout most of Canada and western United States. Winters to north-west South America. Occasional in Eurasia.

This is a monotypic species[1]. The closest relative of this species seems to be Chiloe Wigeon and not Eurasian Wigeon[2].

Formerly placed in the genus Anas.

Breeds in short-grass and other prairie in the vicinity of shallow wetlands. On migration and winter, forages in marshes, fields, and shallow waters.

A dabbling duck, but more likely to be grazing on fields than most other Anas ducks.

Seven to ten eggs is most common, with wider variations possible. Eggs are creamy-yellow to white and nest is in grassy/scrubby areas near water.

The male has a weak clear whistle in three syllables: wee-whee-whoe (middle is higher pitched), whereas the female has a low growl qua-ack.

Search for photos of American Wigeon in the gallery