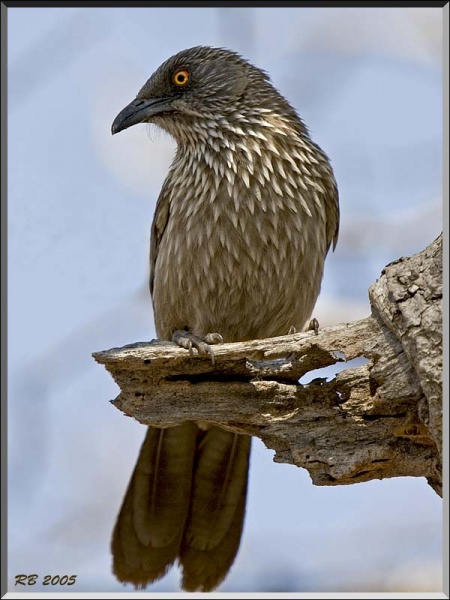 Adult: Above brown, streaked blackish, with indistinct white spots on the rump and upper tail coverts; below brownish grey, streaked with white arrowhead markings; wings and tail dark brown. Eyes look light orange in the field, but the irises are actually orange with a red outer ring, or yellow with an orange outer ring. The bill, legs and feet are black.

Turdoides jardineii has eight subspecies that vary in the shade of the brown plumage and in size.

Flight straight with alternating fluttering and gliding; members of flock follow each other in loose succession from bush to bush. Roosts communally.

Forages on the ground and in undergrowth in noisy groups of 4-10 birds.

This species breeds co-operatively; all members of a group (up to seven individuals) contribute to nest-building, incubation and feeding of nestlings. The nest is a mass of grass and twigs with a bowl-shaped hollow on top, lined with fibres and rootlets. It is usually 3-7 m above the ground in dense cover. Two to five eggs (usually three) are laid October to March in the south and throughout the year through most of its range. Eggs are plain turquoise or greenish blue.

The Arrow-marked Babbler is an important host of Levaillant's Cuckoo which parasitises 7-8% of nests in southern Africa.

Search for photos of Arrow-marked Babbler in the gallery