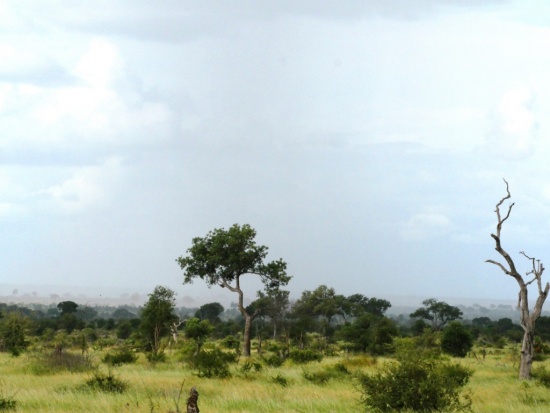 At the end of the 5 year drought
Photo by Doc Duck
The Veldt, February 2017 South Africa 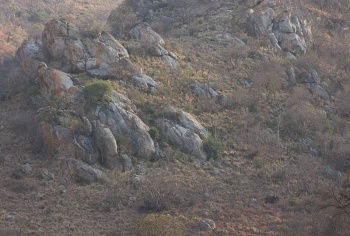 Like many African national parks Kruger is best known for its mammals and most of the more sought-after species are here. However, this vast park, 350km long and 60km wide and covering nearly 20,000 km2, has a birdlist of over 520 species and is one of the best birding areas in Africa.

The main habitat is savanna with open to dense woodland of various types including Mopane, Acacia and Terminalia. In addition there are many areas of riverine woodland scattered through the park and these are among the most productive habitats for birders. 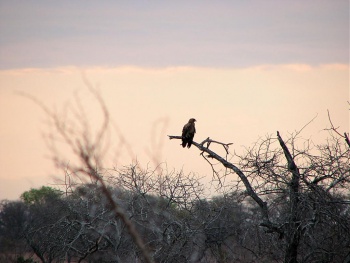 The avian inhabitants of the park range from tiny sunbirds and waxbills up to the world's largest bird, the Common Ostrich and the Ostriches here are one of the very few remaining pure populations of the southern race. Other large and spectacular birds include Goliath Heron, Saddle-billed Stork and Marabou Stork, Kori Bustard and Southern Ground Hornbill all of which are widespread through the park.

Raptors are well represented with species such as Secretary Bird, Cape Griffon and Lappet-faced Vulture, Bateleur, Crowned Hawk-Eagle, Martial Eagle and Verreaux's Eagle and a variety of kites, hawks, harriers and falcons. 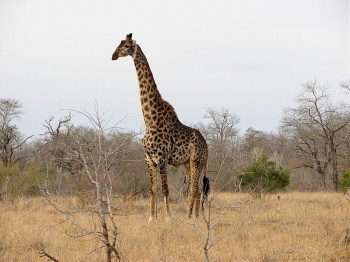 The Kruger National Park is a memorial to President Paul Kruger, and those who have upheld his vision of a protected wilderness reserve.

More about the history of the park can be found here

Skukuza Camp, accessible by air, is one of the most popular with birders and Lower Sabie to the south-east on the Sabie River is another good area. Further north good birding can be found at Olifants in the centre of the park and in the hilly country of the far north around Pafuri.

Kruger is very popular with visitors and there are numerous camps throughout the park all of which provide excellent accommodation and superb birding.

Search for photos of Kruger National Park in the gallery

Search for videos of Kruger National Park on BirdForum TV

The Kruger Park is full of surprises. At every turn in the road you will be likely to find another bird or animal species. The park is larger than the review states, now approx 37000 sq.kms. The Kruger is truly a great park by world standards and affordable by just about everyone. As you can see from the species list you will have your work cut out for you.

There really is something for everyone.

Birds - anytime. Animals - April to October when the grass is shorter before the rains.

When planning your visit move rest camp every 3 or 4 days to see the most. Eco zones change as you move on so the chances of seeing more increase significantly by doing this.

The Kruger Park is really an awesome experience.There is great birding throughout its length and breadth.There is one area that deserves special mention,and that's the Pafuri area in the extreme north.The Pafuri is the southern most limit of a number of the tropical birds.The closest camp to the Pafuri area is Punda Maria.There is very good birding in and around the camp.Here's a list of birds frequently seen in the Punda Maria Camp.

Superb Birding although lack of dawn and dusk birding due to park restrictions was frustrating. Some species are very localised. One of the easiest spots in africa (supposedly) to see Pel's fishing owl Pafuri (NE corner); this small area arguably holds the best localised patch of birding on the reserve.

Tip: Take a spotlight for the night drives.

A week in the Kruger should be enough to see all the specialties. By this time you'll probably be suffering from car-bound fever and be glad to move on to equally good birding in other areas of SA.

For wildlife in general this place for me is a 10.