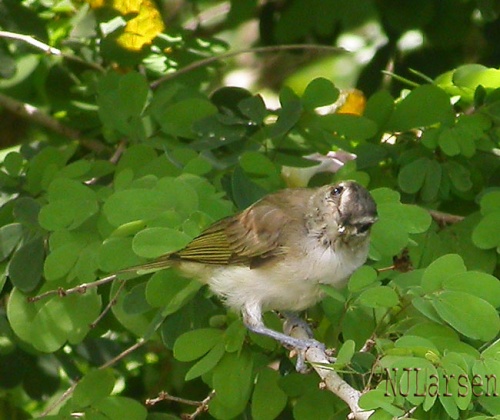 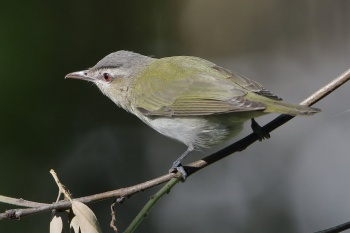 15–16·5 cm (6-6½ in)
Back olive without wing-bars, lighter underside. In the head, strong white eye-brow, dark line from base of bill to eye, and continued behind eye, black whiskers and a bill that looks disproportionately long.

Red-eyed Vireo is the most similar species within the area, but has brighter green upperparts, whiter underparts, shorter bill, and lacks the whiskers. In some areas, this vireo is present in the "chivi" sub-species which is slightly different from the Red-eyed Vireos from the USA.

Breeding in southern Florida and through most of the Caribbean. Partial migrant that is noted as a passage bird in e.g., Venezuela.

Known to winter to e.g., Brazil; even birds that don't leave the island of breeding may undergo e.g., altitudinal migration.

There are six subspecies[1]:

Forests, mangroves, and gardens at most if not all altitudes.

Not quite as slow-moving as described in the Raffaele et al. Birds of the West Indies.

Gleans insects from leaves but also utilizes hovering. Their diet consists mostly of arthropods, such as weevils, beetles, caterpillars, bees and wasps.

Search for photos of Black-whiskered Vireo in the gallery

Search for photos of Black-whiskered Vireo in the gallery