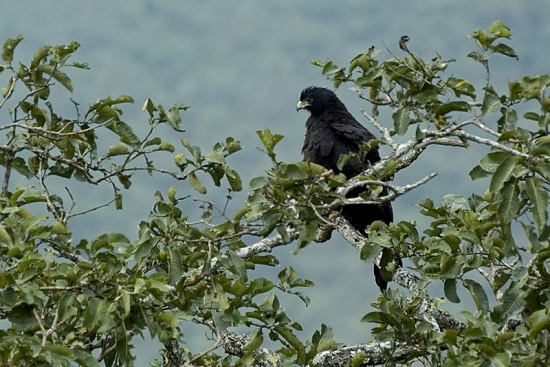 70-80cm. Black to dark brown, paler on secondaries and scapulars, sometimes white patch on the upper tail coverts, brown eyes, yellow cere and feet.
Sexes similar.
Immatures - dark sepia brown above, buff tipped feathers on crown and nape, upper tail coverts banded with sepia and buff making a pale bar across the base of the tail, golden brown sides of the head, rufous under side as far as the tail coverts, black streaks on breast, some black bars on the tail coverts, buff under-wing. 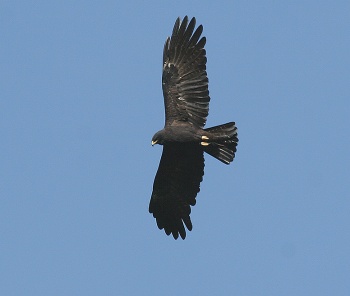 Southern Asia: breeds in India and Sri Lanka and from the western Himalayas east to southern China and Hainan and south to the Malay Peninsula. Also occurs on Sumatra, Java, Borneo, Sulawesi and Maluku (Moluccas). Has been recorded in Taiwan and a rare straggler to Pakistan. Resident.

Hunts in slow circular flight over open country and the forest canopy.

The diet includes birds' eggs and young birds, mammals up to the size of a large rat, bats, and swiftlets.

It builds a large nest high up in a big tree, made of small sticks, and lined with green leaves. Pairs often have two nests about a mile apart. They lay a single egg.

Search for photos of Black Eagle in the gallery