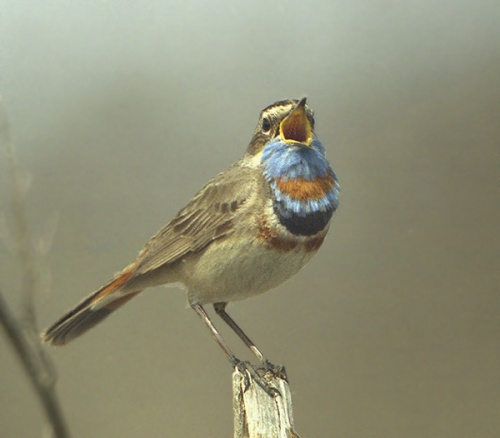 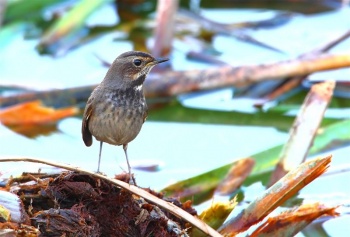 Male: blue throat, which may have red or white spots depending on the subspecies
Female: throat mainly white with a dark band over the breast 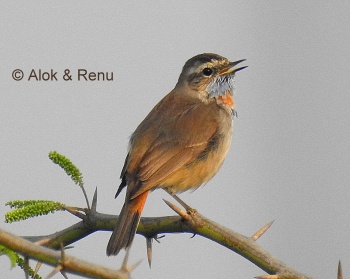 Main breeding range is in the north and east of the Region, breeds through most of Norway, upland Sweden and north Finland and from Poland and the Baltic States east to the Urals, breeding south to northern Ukraine. Also breeds in very scattered pockets across Europe in Spain and west and central France east to Hungary with an isolated population in the Caucasus and north-east Turkey. Has bred in Britain, Switzerland, Italy and Romania.

A migrant over most of range leaving in August-September to winter around the Mediterranean in small numbers, more commonly in sub-Saharan Africa and the Middle East and returning in March-May. Passage birds occur throughout Europe including Britain where 50-150 occur in most years, mainly on the east coast and Shetland in particular with May and September the peak months. 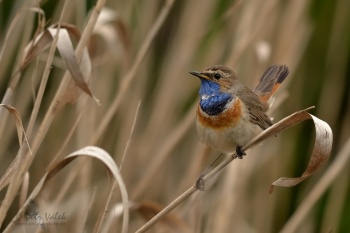 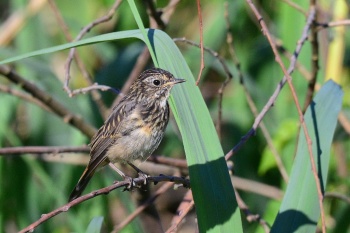 A number of races occur in the Western Palearctic some of which are separable in the field, differing in throat colour of breeding male. The nominate svecica has a blue throat with red central spot and broad black band beneath. Central European cyanecula has white throat spot (or, rarely, none at all), and darker upperparts and namnetum is similar but smaller. South Russian pallidigularis has pale chestnut bar or triangle on paler blue throat and narrower black band and Caucasian magna is similar but larger.

However, there is much individual variation and intergradation between races and isolated pockets of red-spotted birds within range of cyanecula.

See this thread for a discussion of Bluethroat subspecies.

Breeds on wooded tundra, open birch forest and willow scrub often close to water in thickets beside lakes, rivers and swamps. Out of the breeding season in reedbeds, open grassland and in cultivated areas.

The Bluethroat is a ground forager when it constantly runs-stops-and-flicks; it also captures insects in the air.

Search for photos of Bluethroat in the BirdForum Gallery

Search for videos of Bluethroat on BirdForum TV