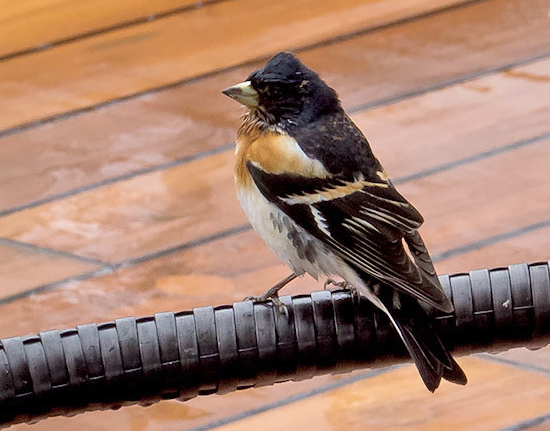 Breeding male
Photo © by Joseph Morlan
On ship off Commander Islands, Russia, 12 May 2017 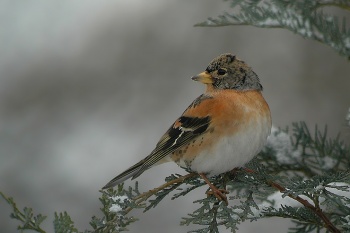 Female: similar to winter male, but with a grey crown
Juvenile: the white rump has a yellow tinge, 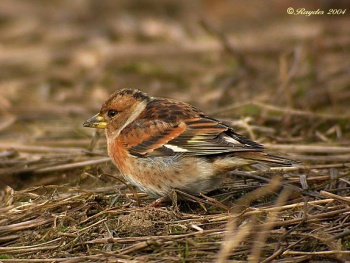 Breeds throughout Norway and in all but southernmost parts of Sweden and Finland, in Estonia and across northern Russia east to the Urals. An isolated population breeds in the Alps in northern Italy and has bred in Iceland, north-central Scotland, Netherlands, Germany and Denmark.

A migratory species with autumn passage mainly in mid-September to October, sometimes November with most birds moving south or south-west through Europe. Widespread in winter throughout Europe south of breeding range occurring west to Iberia and south to the Mediterranean, Turkey and the Middle East. Return passage takes place in March-mid May.

Vagrants recorded in Iceland and Faroes and has bred in both, also recorded in the Canaries, Madeira, Cyprus and North Africa, Jordan and Iraq. 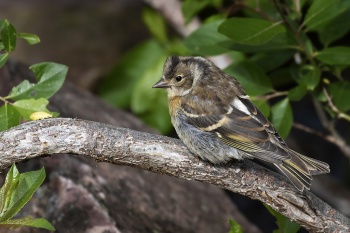 Breeds in open coniferous forest, birch woodland and riverine willows and winters along woodland edges close to open farmland and especially stubble fields. In some areas large numbers gather in autumn and winter in beech woods to feed on beech mast, also fond of hornbeam seeds.

In winter usually found in large mixed flocks with other finches mostly feeding in stubble fields lined with trees and bushes. They will visit garden feeders, especially in hard weather.

Flight is very similar to Chaffinch.

Monogamous. The female builds the cup shaped nest, in the fork of a birch (sometimes a spruce) tree, from moss, grass, bark, lichen and hair, lining it with feathers and wool. The clutch generally consists of around 5-7 eggs which are shiny, greenish through to brownish with dark brown markings which are incubated by the female for 11-12 days. The young are fed by both adults and fledge after 11-13 days. There may be a second brood in Siberia and Russia. 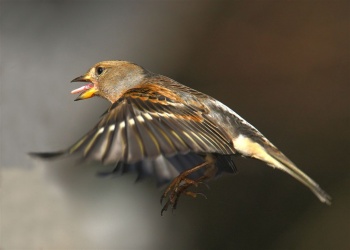 Their diet consists of seeds, fruit and, during the breeding season small insects and their larvae. In the winter they are particularly fond of beech mast.

Listen in an external program Listen to Brambling voice clip

Search for photos of Brambling in the gallery

Search for videos of Brambling on BirdForum TV