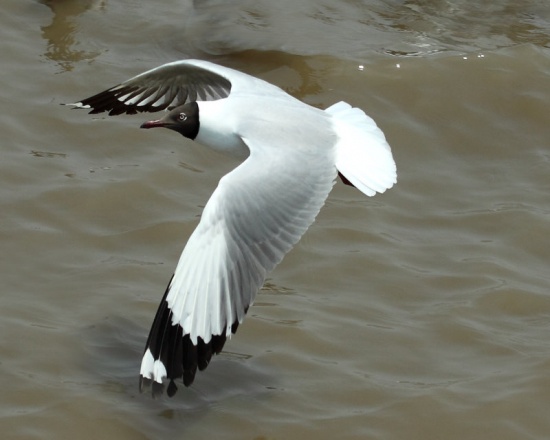 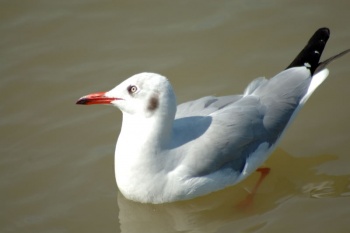 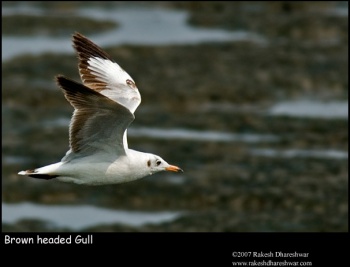 Similar to Black-headed Gull but note different wing patterns and white eye in adults. For juveniles and first-winter birds see text above. 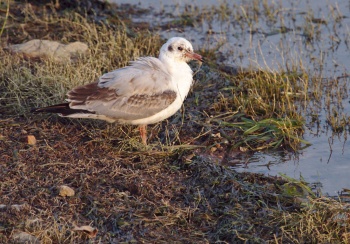 Breeds in the mountains of south-central Asia between 3000 and 4500m. Winters on the coasts of India, Sri Lanka and southeast Asia, sparingly west to the Arabian Peninsula.
Common to abundant in its range.

This is a monotypic species[1] which is sometimes placed in the genus Larus[2].

Mountain marshes, reedbeds, and islands in lakes during breeding season, at coasts or rivers during winter.

They have a very wide ranging diet; live prey consisting of fish, shrimps, insects, slugs, worms and rodents. They also eat offal and visit sewage farms. Plant material such as shoots and potatoes are also included.

It nests colonially on the ground, with breeding season starting in May. Starts laying eggs even when breeding lakes are still frozen.
Colonies usually with around 50 pairs but also bigger ones with several thousand pairs (Tibet) known. Breeds often near to Common Terns.
The nests are close together and are made of masses of plant stems. Lays 3 eggs.
One record of hybridisation with Slender-billed Gull.

Search for photos of Brown-headed Gull in the gallery

Search for videos of Brown-headed Gull on BirdForum TV