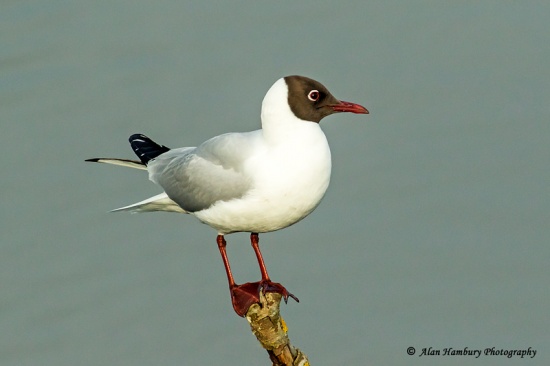 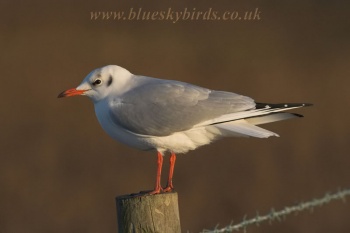 Length 37-43 cm (14.5-17 ins)
Wingspan 94-110 cm (37-43 ins)
Weight 195-325 g
Summer White, with silver-grey mantle and wings. Black wing tips and noticeable white streak along forewing. Head is chocolate-brown, which does not reach nape or neck. White eye-ring. Bill uniform dark red; legs red.
Winter In winter the head is white with a few dark smudges. Wings, body and legs as summer adult. Bill bright red, usually with a dark tip. Juvenile extensively light brown above with 'scalloped' feather edges, breast also tinged pale brown, for a month or two after fledging. First Winter this is very similar to normal adult winter plumage except that the bird retains brown juvenile wing coverts, the head and body moult commences during July. The remaining juvenile feathering gradually fades with wear as the winter progresses and during the period January to May the coverts will be moulted and adult plumage come through. 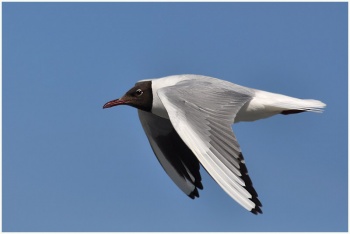 Little Gull is smaller with much thinner shorter bill, much more extensive hood, and very short primary projection.
Bonaparte's Gull is slightly smaller, with more extensive black hood, grey of mantle extending further up the rear of the neck, slightly shorter and thinner black bill, no extensive black on the underside of the primaries in flight, and pink legs.
Slender-billed Gull is similar-sized but with a more elongated neck and longer, thinner bill; it shares the same wing pattern but has an all-white head, with no hood in summer, and only the faintest of ear smudges in winter. Immatures are slightly paler than the corresponding Black-headed's immature plumages.
Brown-headed Gull is very similar but they show different wing patterns and adults have white eyes. Juvenile Brown-headed Gulls have solid black wing-tips and white restricted to streaks on inner primaries and primary coverts dark-streaked.
Mediterranean Gull is slightly larger, more heavily-built, with a thicker bill, white wingtips in adults, and a jet-black hood in summer adults. Franklin's Gull is slightly smaller with much darker back, thicker bill, and large white primary tips.
Laughing Gull is distinctly larger (almost Common Gull-sized) with much darker grey back, much larger bill, and longer-winged with large black primary tips with small white terminal spots.
Brown-hooded Gull ranges along the coasts of Southern South America. It was considered conspecific with Black-headed Gull by Hellmayr. Brown-hooded has a slightly darker mantle, narrower dark subterminal band on its primaries, more dark at the bases of its outermost primaries, and distinct white primary tips. 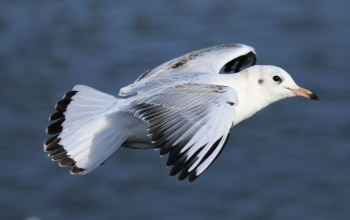 Widespread and abundant over much of the region and often the most familiar gull in inland areas. Breeds in Iceland, the Faroes and British Isles, southern parts of Sweden and Finland and sparingly in Norway and across Europe from northern France to Russia and south to the Black and Caspian Seas. Breeds in small numbers in scattered areas of southern France, Italy, and Spain, Sardinia, Sicily and central Turkey.

Resident in north-west of range but migratory in Scandinavia, eastern Europe and Russia. Winter range extensive in southern Europe and around the Mediterranean and south on Atlantic coasts of northwest Africa, the Middle East and southern Iraq.

Vagrant north to Svalbard, Bear Island, and Jan Mayen and south to Cape Verde Islands. Also vagrant to United States and Canada, mostly in the northeast but also in the Midwest and along the Pacific Coast. 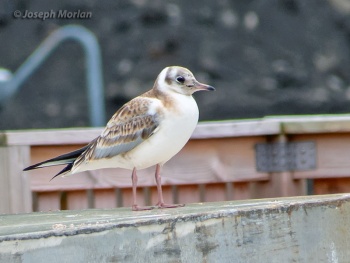 This is a monotypic species[1].
Subspecies sibiricus is generally considered invalid[2].
Formerly treated in the genus Larus.
Has been treated conspecific with Brown-headed Gull as the population in Pamir shows intermediate characteristics between the two species. Hybrids with Mediterranean Gull, Slender-billed Gull and with Common Gull have been reported.

Breeds in colonies beside fresh, brackish or salt water in swamps, reeds and other vegetation, often on islands, shingle-bars and sandspits. Outside breeding season both coastal and inland. Found on sandy and muddy shores and estuaries, and inland on farmland, playing-fields, reservoirs and gravel pits. As a vagrant in the United States often found with Bonaparte's Gulls or other gulls at loafing areas.

Breeds mostly in colonies, usually 10 to 100 pairs but some colonies with up to 10,000 pairs. Returns to colony in late April and March, lays eggs in late April and May. Normally the nest is formed from a scrape in the ground but may be on a pile of dead plant material. The glossy eggs are a light greenish-blue with dark blotches. Both adults incubate the eggs and feed the young. 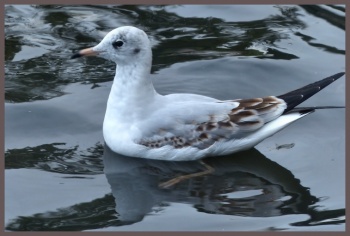 Search for photos of Black-headed Gull in the gallery

Search for photos of Black-headed Gull in the gallery