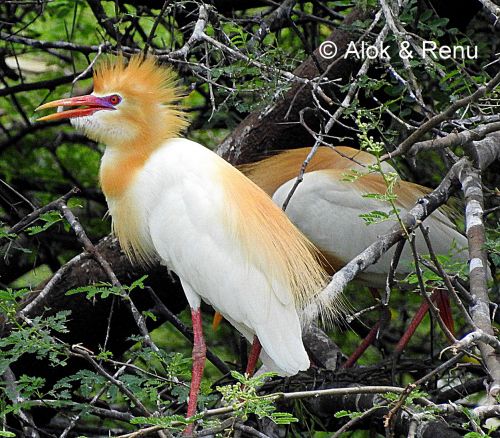 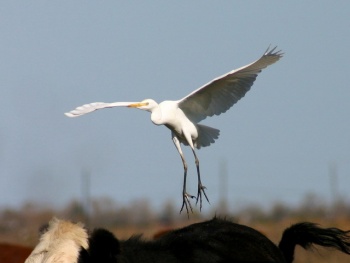 Length 46–56 cm (18-22 in), wingspan about 90-96 cm (nominate race).
The Cattle Egret has a compact build with white plumage, yellow bill, and mostly yellow legs. One characteristic feature is the short stubby bill with obvious feathering extending out along the lower mandible to the mid point.

When breeding, buff plumes develop on the crown and lower back, and parts of the breast also develop buff tones (or in some birds, more rusty-brown). In high breeding, bill and legs become reddish; however, this is held much shorter than the plumage.

Females in winter plumage lack extended throat feathers seen in the male, but otherwise, the sexes are similar.

Juvenile birds have a greyish-black wash to bill and legs.

Juvenile birds with mostly dark bill can be confused with immature Little Blue Heron. Adults in non-breeding plumage may be confused with the much larger white morph of the Great Blue Heron or with the Great Egret. However Cattle Egret is much smaller and more compact. Intermediate Egret is larger but usually has more extensive diaphanous plumes hanging from its scapulars and breast. 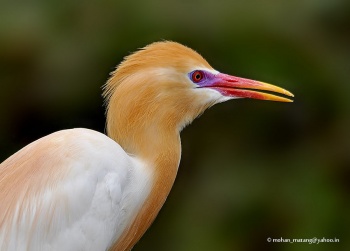 Cattle egret is found almost around the globe in tropical, subtropical, and warmer temperate areas.
Occurs widely in sub-Saharan Africa from Senegal to Sudan and south to South Africa including Madagascar and the Seychelles. Also breeds in north-west Africa, Iberia and parts of southern France.

Has recently has begun breeding in the Canary Islands, and in western, central and northern France, Belgium, on Sardinia and around the eastern Mediterranean in Turkey, the Middle East and Egypt. Small numbers breed in the Volga Delta of Russia.

In Asia breeds throughout the Indian Subcontinent east to China and southern Japan and south to Indonesia, New Guinea and throughout Australia except the most arid interior.

Also widespread in the Americas. In North America occurs from south-east Canada south to Florida and the Gulf Coast and in the west breeds in California and Utah and regularly occurs north to British Columbia during post-breeding dispersal.

Found throughout Mexico, Central America and the West Indies and in South America extends south to northern Argentina. Recorded as a vagrant in most European countries where not regular, north to Iceland, Scandinavia and Poland, and also in the Azores, Madeira and the Canary Islands but some reports may involve escapes. British records, (c.120), widely scattered from Sicilly north to Shetland and throughout the year. Has bred in the Canaries and Cape Verde Islands and the first breeding for the Balearic Islands was recorded on Mallorca in 1997.

A native of Africa and Asia, the Cattle Egret found its own way to the Americas, arriving in the northeast of South America in 1877. It first arrived the USA in 1941 and nesting was noted in 1953. During the next 50 years its population expanded, making it one of the most numerous North American herons.

Some resources place this species in genus Ardea 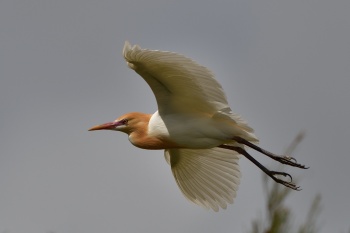 B. i. seychellarum: of the Seychelles supposedly intermediate between nominate and coromandus is no longer recognized. It is now merged with the nominate subspecies.[1]

Freshwater margins and open grasslands. Often associates with cattle and other livestock; and also wild ungulates, frequently close to human habitation. Breeds colonially in trees, usually close to water but often seen far from water at other seasons. 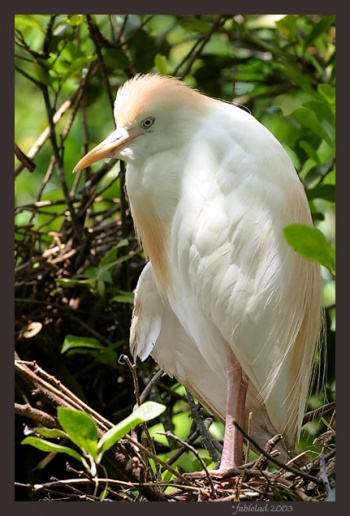 The Cattle Egret’s feeding grounds are usually under 20km from roost site. Typically hunts by walking steadily and stabbing at prey. It feeds on insects, especially grasshoppers, locusts and beetles.

Colonial nester, usually with other waterbirds. Nest are built from collected or stolen (from other nests) dry sticks, weed stems and reeds; occasionally lined with grass.

Many populations are dispersive and undergo rather random movements, while others are more strongly migratory.