Sexes are similar except larger female has more extensive dark markings on chin, breast, and sides of neck. Juvenile has pale-fringed upperparts and orange eyes although eye color may turn yellowish by early fall.
Juvenile also has a buffy wash to the underparts, especially in the underwing coverts. Distinctive, unlikely to be confused. Bald Eagle is larger, usually dark-bodied, with adults having all-white head and tail. It soars with wings nearly flat. At a distance, Osprey may be confused with large, dark-backed gulls, especially adult Great Black-backed Gull, but similar gulls have all-white head and tail, white trailing edge to blackish upperwings, and lack Osprey's prominent crooked wings in flight. North America, Central America, South America, Africa, Eurasia and Australasia. Except for breeding in Australasia, this species breeds in the northern hemisphere and migrates south in winter. See Subspecies, below, for detail. 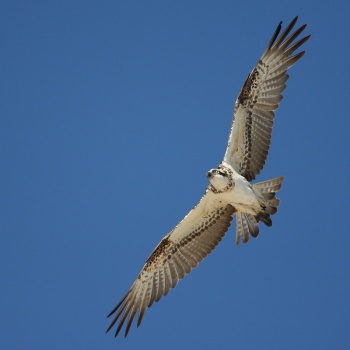 Four[1] to six subspecies are recognised.

A widespread breeding summer visitor to much of Scandinavia and Russia, Belarus and Ukraine. Smaller =isolated pockets of range in Scotland, Germany, Poland and the Baltic States. There are also small resident populations further south on the Atlantic coast of southern Portugal, on the Mediterranean coast of Spain, the Balearics and on Corsica. Increasing in Scotland since its recolonisation in the 1950s and now breeding in the south, and the first breeding in England for centuries has taken place. One pair bred in Cumbria in 2001 and a reintroduction scheme using birds translocated from Scotland led to successful breeding at Rutland Water. Also in 2002 nest-building occurred for the first time in the Netherlands.

Occurs as a widespread migrant throughout Europe with peak passage periods in March-May and August-September. Migrants do not concentrate at particular sites to cross seas as many other raptors do. Most winter in sub-saharan Africa but some in the western Mediterranean, in particular on Sardinia, Sicily and North-West Africa, also at the head of the Red Sea and in southern Iraq. Vagrants recorded north to Ireland, Iceland and Faroes, also on the Azores and Madeira. A widespread breeder across northern Asia from the Urals east to Kamchatka, Sakhlain and Japan. Also breeds in the Middle East mainly on islands in the Red Sea and Persian Gulf.

A widepread and common winter visitor to Africa from the Palearctic, most numerous in West Africa but also occurs east to Somalia and south to the Cape. Breeding range in Africa is restricted the Mediterranean coast of Morocco and western Algeria and the Red Sea and has bred on rare occasions in southern Africa. However, it does breed on the Canary Islands and Cape Verde Islands in the Atlantic. Asian birds winter in in India and southeast Asia from southern China, Taiwan, Hainan and the Philippines south to Sumatra and Borneo.

Breeds from western Alaska and across much of non-Arctic Canada, and in the USA over much of the north-west as far as southern California. In the east breeds around the Great Lakes, on the east coast south to Florida and west along the Gulf Coast to Mississippi. Also breeds coastally in Mexico in Baja California, Sonora, Sinaloa. A summer visitor which winters from Mexico, the West Indies and in South America south to central Chile in the west and Uruguay in the east.

Breeds in Florida, eastern Mexico on the east coast of the Yucatan Peninsula and in adjacent Belize, and the Caribbean in the Bahamas and Cuba; resident. The Osprey does not breed in South America.

Australasian breeders are resident and occur from Sulawesi and the Lesser Sundas to New Guinea, the Bismarck Archipelago, Solomon Islands and New Caledonia. In Australia breeds on much of the western and northern coasts and in the east on the coral islands of the Great Barrier Reef. Now rare on the south coast but still breeds in the Spencer Gulf and Adelaide areas.

Birds from the Philippines to northern Australia are sometimes separated as P. h. melvillensis and those from New Caledonia as P. h. microhaliaetus but these races are usually included in P. h. cristatus.

The main subspecies have in the past been seen as full species, and there are some DNA data that support that view. The most widely followed split is between Australasian birds (as P. cristatus) and the rest; names that have been used for the split species are Eastern Osprey for P. cristatus, and Western Osprey for the rest[6].

Closely tied to water at all seasons.

Among the characteristic behaviors, the one where it hovers over, for example, a clear water lake and then splashes in so that the entire bird seems to disappear may be the most spectacular. Quite often, it will come up again carrying a fish, its main food (see diet).

Season varies. Spring and summer in temperate latitude but winter to spring in tropical regions. Nesting in dispersed pairs or loose colonies. Nest is a large stick platform nest lined with seaweed, bark, leaves, or grass. It is usually placed in a large tree, but they will also use power poles, rocky cliffs, offshore stacks, or on the ground. They readily use artificial platforms erected for their benefit. The same nest may be reused each season with both male and female adding material each season so that the nest may reach enormous size. Clutch size is 2-4 white eggs marked with brown spots and blotches. Incubation is largely by the female and takes 34-43 days.

Relatively silent away from nest-site, but noisy close to it, with several different vocalizations. Female’s calls generally stronger and lower-pitched than those of male. Guard Call is a series of slow, whistled notes, falling rapidly in pitch given by both sexes. It has been described as sounding like a whistling kettle taken rapidly off a stove. Male also gives a screaming call in courtship. Osprey sound clip

Search for photos of Osprey in the gallery

Search for photos of Osprey in the gallery