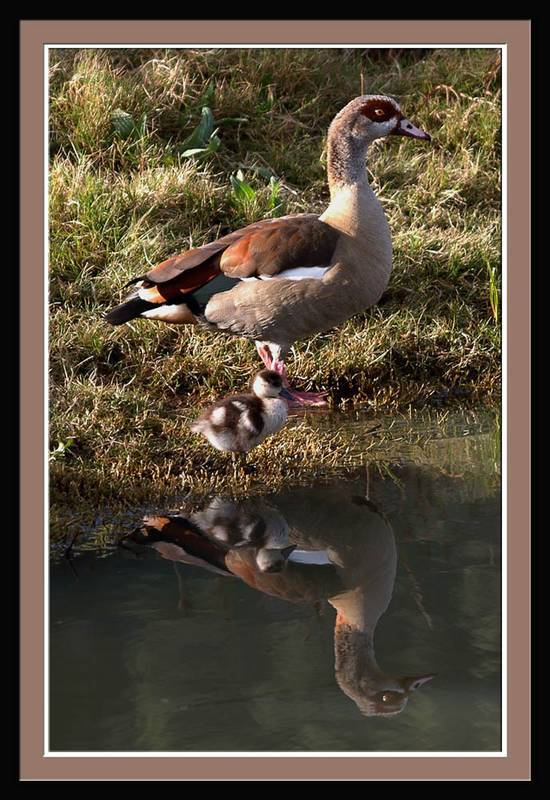 L. 63 - 73 cm Males average slightly larger.
There is a fair amount of variation in plumage tone, with some birds greyer and others browner, but this is not sex or age related. This is a largely terrestrial species, which will also perch readily on trees and buildings. It swims well, and in flight looks heavy, more like a goose than a duck, hence the English name.

Africa: Breeding in sub-Saharan Africa and the Nile Valley. Recorded occasionally in winter in Algeria and Tunisia and as a vagrant to Sinai, Cyprus and Malta.

Europe: The introduced population in Britain is based in Norfolk, particularly around Holkham. Egyptian Geese occasionally breed elsewhere in England and in winter they can appear at almost any site in southern and eastern England as a result of local escapes or wanderers from Norfolk. The Belgian population is in excess of 250 pairs mainly around Brussels and in Flanders. More than 1300 pairs now breed in the Netherlands and from here the species has spread to Germany where several hundred pairs are now established in Northrhein-Westphalen and Schleswig-Holstein and probably elsewhere, and to Denmark where 20-30 pairs were breeding in 2010. In addition there are a few pairs breeding ferally in Brittany, records from elsewhere in the region probably relate to local escapes or wanderers from established populations. 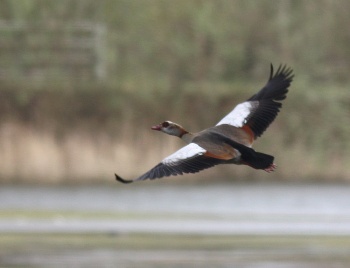 European birds tend to stay in the breeding area during mild winters but migrate further south when the temperature gets below freezing for any significant time.

In Africa, found on rivers, lakes and pools in all but the most heavily forested areas. In Britain mainly on lowland farmland, open woodland and parkland.

Ideal settings in Europe seems to be freshwater ponds and lakes with little vegetation along the edge. 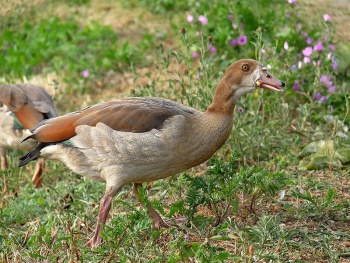 This is a territorial species in the breeding season, and will nest in a large variety of situations. Egyptian Geese pair for life.

Search for photos of Egyptian Goose in the gallery

Search for videos of Egyptian Goose on BirdForum TV