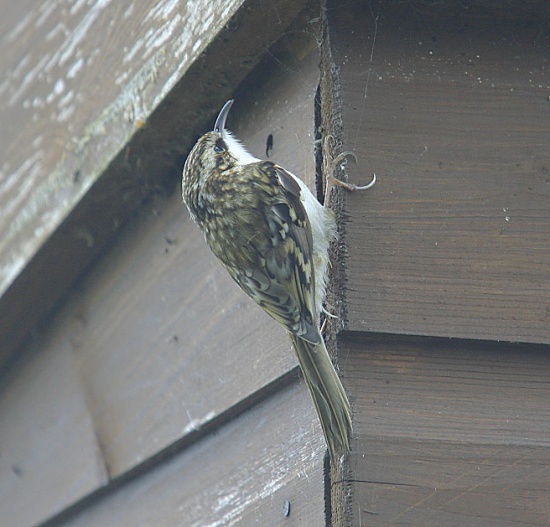 L. 12.5-14cm
This is a small, elongated bird, fairly drab in appearance, streaked brownish above and white below. It has long stiff tail feathers which help it creep up tree trunks like a mouse looking for insects. It has a long curved bill. 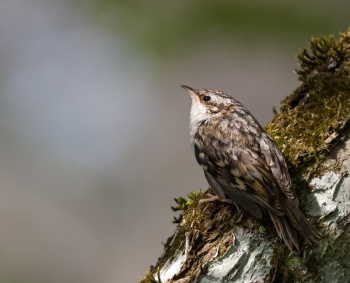 Common and widespread in the British Isles and from east and south-east France east across Europe to the Urals. Isolated populations breeding in central and south-west France, the Pyrenees and Cantabrians, Corsica and the Apennines, in northern Turkey and the Caucasus. A partial migrant in north of range, occasionally eruptive, but mainly resident elsewhere.
Outside Europe found east to Siberia and China.

Vagrants recorded in the Faroes, Channel Islands and now annually in the Netherlands.

This species has previously been considered to include American Treecreeper and Hodgson's Treecreeper. 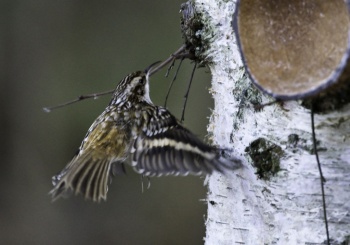 In areas where Short-toed Treecreeper also occurs this species tends to be confined to upland areas and often conifers. Elsewhere found in deciduous woodland, parks and large gardens. In parks often found on exotic redwood trees.

Will climb up a tree trunk looking for insects and spiders in the crevices of the bark and using its feet with a long hindclaw to cling onto the trunk. Once close to the top of one tree it will fly to the base of the next and then work its way up again; it will never go down the trunk or branch, or even for a short time sit with the head pointing down.

The nest is concealed behind loose bark, in tree crevices or holes in walls. It is loosely built from grass, rootlets and bark fibres and lined with moss and wool. The 5 or 6 (sometimes more) white eggs have reddish-brown spots clustered at the large end. There may be a second clutch.

They eat mainly insects and spiders.

Search for photos of Eurasian Treecreeper in the gallery

Search for videos of Eurasian Treecreeper on BirdForum TV