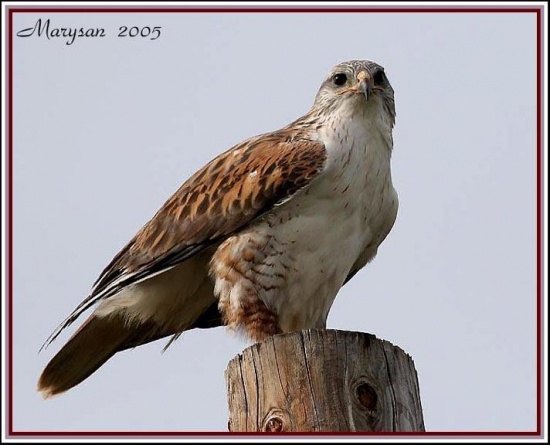 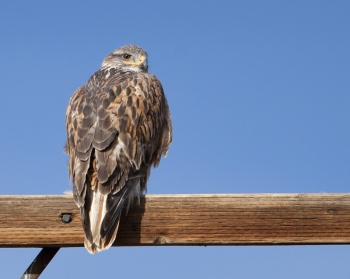 Length 50–66 cm (19¾-30in; wingspan 134–152 cm (52¾-60in)
This is the largest North American Buteo occurring in two distinct color morphs. Dark morphs comprise fewer than 10% of birds breeding in Alberta and fewer than 5% elsewhere. It is a large, massive hawk with broad wings, a large head, wide gape, and robust chest legs and feet. Tail is white with variable rusty or gray tip. Adult light morph is mostly white with pale gray head and rusty mottling on wing coverts and thighs. Dark morph is all chocolate-brown or blackish with white tail and remiges tipped variably with dusky. The juvenile light morph is similar to the adult but lacks the rusty mottling on its leg feathers. Males and females are similar with females averaging slightly larger. 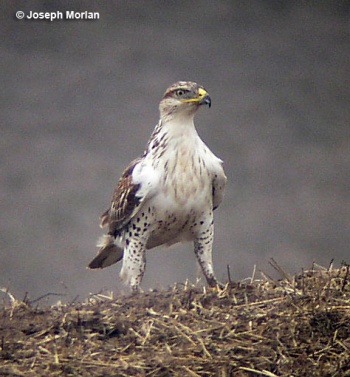 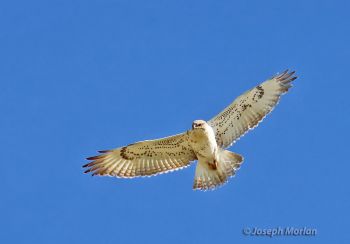 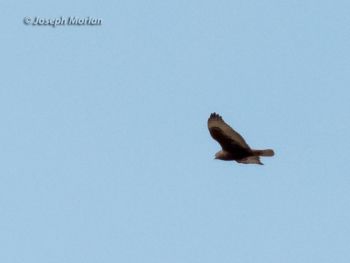 Nests initiated from March to May depending on latitude; in Canada, laying about 2 weeks later than in center of range. Large, bulky stick nest usually on cliff face or situated on the remains of pre-existing hawk or crow nests. May use artificial nest platforms. Average annual clutch varies from 2 to 4 eggs, but can range from 1 to 8. Young typically first leave the nest at 38–50 days.

Usually silent. Screams and calls accompany flight displays. Alarm Call, kree-a or kaah kaah, is described as similar to that of Herring Gull

Search for photos of Ferruginous Hawk in the gallery