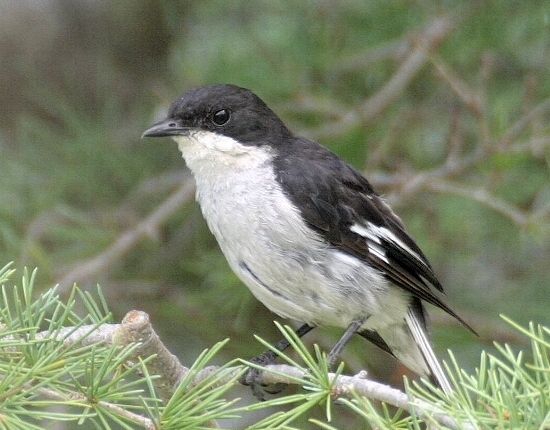 17-20 cm
Adult male: Black above and greyish white below (breast and flanks darker than throat and belly) with white wing patches and white sides to the tail.
Adult female: Dark grey-brown, not black, above and browner below.

The juvenile is like the female but duller and with brown spots and scalloping above and below. 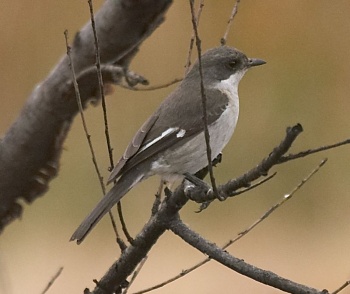 The male can be confused with the Common Fiscal, but the shrike has a heavy, hooked bill, a white patch on the shoulder rather than the lower wing, and has no white on its longer tail.

The Fiscal Flycatcher is larger than the male Collared Flycatcher, which has a white collar and lacks white wing panels.

Southern Africa: South Africa, Swaziland, and south-eastern Botswana; limited distribution in southern Mozambique, the lowlands of Lesotho, and the extreme south of Zimbabwe. 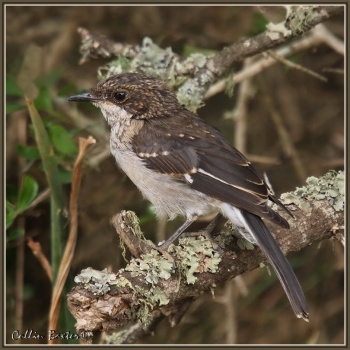 Formerly placed in the genus Sigelus.

Most common in moist and semi-arid lowland grasslands and savanna, valley bushveld and fynbos. The species favours fairly open vegetation, with some trees or shrubs as perches.

The diet consists of insects, often taken in flight and occasionally joins mixed-species foraging flocks. Most foraging is conducted from a perch, often on the top of a bush or small tree, or on a fence, powerline or telephone line.

They build an open cup nest from thin stems and other plant material and lined with plant down. It is placed in a dense bush or tree up to 6 m above the ground. Parasitised by the Jacobin Cuckoo.

The song is a weak chittering, and the alarm call is tssisk.

Search for photos of Fiscal Flycatcher in the BirdForum Gallery