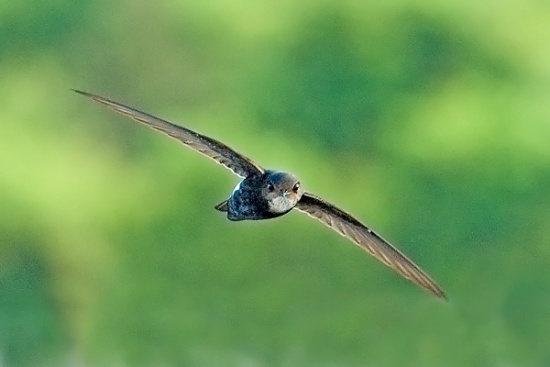 Southeast Asia. From the Nepal to the east into SE China, Myanmar, Thailand, Vietnam, Laos, Cambodia, Malaysia to Indonesia (Borneo, Sumatra, Java) and the Philippines. Also on Taiwan and S Japan.
Common in most of its range and not globally threatened.

Forms a superspecies with Little Swift Apus affinis and is often considered conspecific. As this species is sometimes also called Little Swift confusion is possible.
Four subspecies are recognised:

They forage at about 200m above the forest canopy, or 100m above open ground.

House swifts are found mostly in open habitats suited for this foraging method.

Nests are built close to each other on sheer vertical surfaces. In the wild, they make their nests on limestone cliffs, but they have adapted to human constructions and now colonise buildings, jetties and bridges; including those in busy urban areas. 2-3 white eggs are laid. The chicks are fed regurgitated insects.

Search for photos of House Swift in the BirdForum Gallery