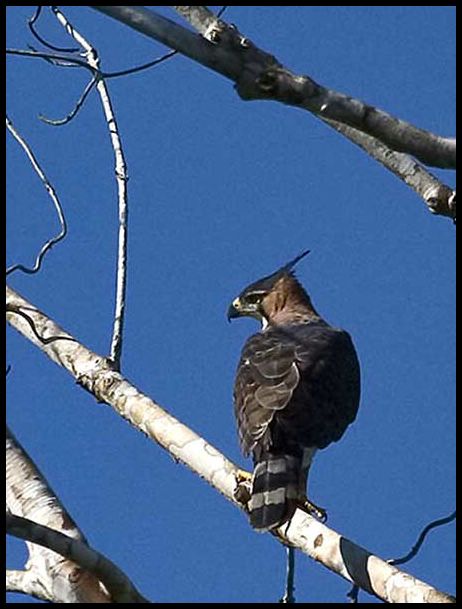 Sexes are similar
Young birds are have a white head, crest and underparts, with brown upperparts, and barring only on the flanks and legs. 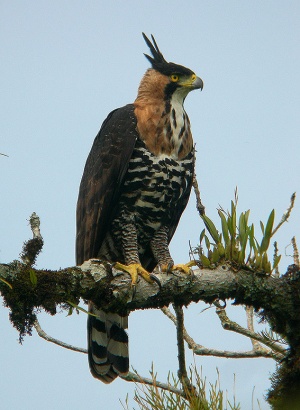 Central America (from southern Mexico) and subtropical and tropical South America including Trinidad.

Display flight is rarely seen but includes fast vertical dives as well as U shaped flight where the bird (probably the male?) starts out going down vertically on outstretched wings, gradually bending the path to the bottom of a U and ending up going vertically up, still on outstretched wings. During display, it will call in series of single whistles[2]. Also described is a display where the male and female in flight locks talons with each other[3].

They build a large stick nest on a branch of a tall tree. 1 egg is laid and incubated for 44 - 48 days. The young hawk-eagle will fledge from 9 1/2 - 13 weeks after hatching, but will stay near the nest and be fed by the parents for up to 1 year after fledging. The female Ornate Hawk-Eagle does most of the feeding of the chick while it is in the nest. The male will bring food to within a few hundred feet of the nest and give the food to the female, but usually does not feed the young.

In regular flight known to give a series of whistles, often 5 but varying from 2-9 repetitions. First note may not be audible, being less loud than the rest; otherwise first note sounds more hurried (and/or slurred) and last note not drawn out, contrary to Black Hawk-Eagle. Other sounds described include a "cat cry" and excited laughter. The song is described as a series of shorter and longer whistles given in a series that does not sound structured.

Search for photos of Ornate Hawk-Eagle in the gallery