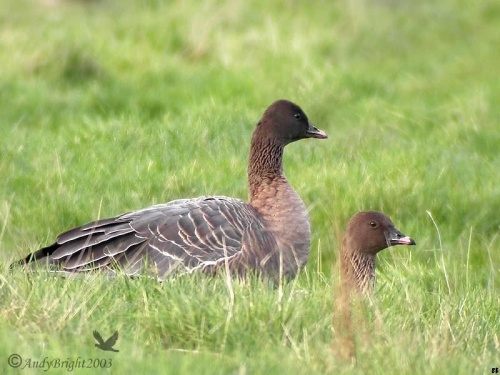 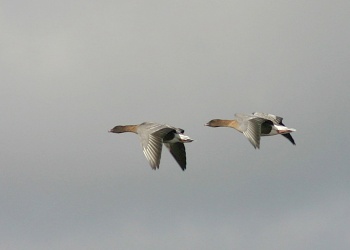 Breeds in two populations, a western one in eastern Greenland and Iceland, and an eastern one on Svalbard north of Norway.

The western population leaves the breeding grounds in mid September to late October for wintering areas in Great Britain, mainly in eastern and southwestern Scotland (particularly early and late in the winter) and northern and eastern England (largest numbers in Lancashire, Northumberland, and Norfolk); rare in other parts of England, and also rare in Wales and Ireland. Return movement is mid-April to mid-May, peaking in late April.
The eastern Svalbard population leaves the breeding grounds in late August to September and passes down the coast of Norway to winter in Denmark, Germany, the Netherlands and Belgium. In severe winters some reach southeastern England and northern France. Returning birds begin to gather in Denmark in March and leave there during April-May.
Small numbers breed ferally in Britain.

Vagrants have been recorded in most European countries south to Spain, Italy and the Ukraine; also recorded in northeastern North America, on the Azores, Madeira, the Canaries and on Malta.

The Svalbard population has tripled its size since the 1960s, and the Iceland - Greenland population nearly tenfold to 360,000 birds. 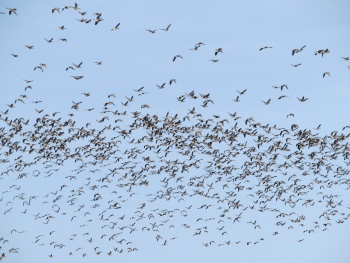 Pink-footed Goose was sometimes included in the past with Tundra Bean Goose and Taiga Bean Goose in a wider concept of Bean Goose.

Breeds on tundra, rock outcrops or low cliffs. In winter feeds on grassland, stubble and crop fields close to estuaries, lakes and reservoirs for roosting.

Highly gregarious in winter, forming huge flocks of up to 60,000 or more; these making a spectacular (and deafening!) sight.

Breeds singly or in small or large loose colonies. They nest on the ground.

Year round have been quick to discover new resources when available, such as new green winter fields due to changes in agricultural habits and they seem also to expand their breeding areas in Svalbard as temperatures are increasing.

Search for photos of Pink-footed Goose in the gallery

Search for videos of Pink-footed Goose on BirdForum TV