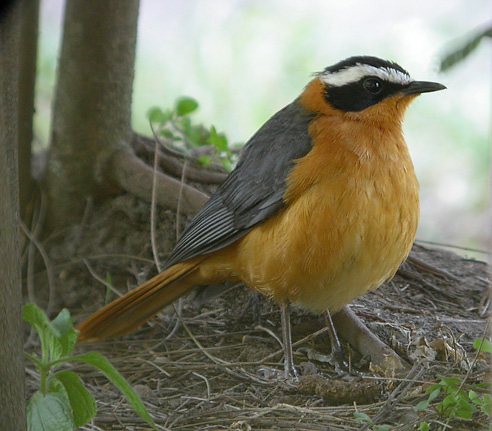 Sexes alike. Juveniles are scaled blackish and lack the supercilium.

Smaller than White-browed Robin-Chat and with darker wings and black central tail.

Moist montane forests and shrubland. Also in country and suburban gardens, often at forest edge.
Occurs from 1400 to 2300 m in East Africa, from 1000 to 3200 in Ethiopia.

Feeds on insects like beetles, caterpillars, moths, grasshoppers and mantises. Forages at driver-ant swarms and sometimes close to smaller mammals, catching insects disturbed by their passage.

Breeding season March to August in Ethiopia and March to June (one record in December) in Kenya. The nest is an open cup made of dead twigs, rootlets, moss and leaf skeletons. It's placed 1 to 2.5 m off the ground in shrub, tree hole, stump or hanging basket in gardens. Lays 2 to 3 eggs. Often parasitised by Red-chested Cuckoo in Kenya.

This is a sedentary species.

Search for photos of Rüppell's Robin-Chat in the gallery