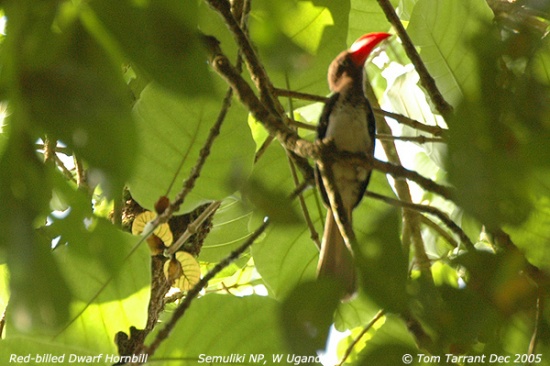 30cm. The smallest hornbill with a distinctive chestnut colour.

Females are smaller and have a black tip on the bill.
Juveniles have smaller, pale orange bills.

Found in tropical Africa from southern Sierra Leone to Democratic Republic of the Congo, northwestern Angola (Cabinda), southwestern South Sudan and western Uganda.
Widespread and common in parts of its range.

This is a monotypic species.
Formerly placed in the genus Tockus.
Bird west of Nigeria were formerly treated as race pulchrirostrirs.

Dense understorey of primary, secondary and gallery forest.
Occurs up to 800m.

Feeds mainly on insects, takes also lizards. Rarely fruit.
Usually seen in groups of 6 or more birds. Follows squirrels and driver-ants to forage for the insects they disturb.
Little known about breeding. Nests in a natural cavity in a tree, the entrance sealed to a narrow slit.

Search for photos of Red-billed Dwarf Hornbill in the gallery