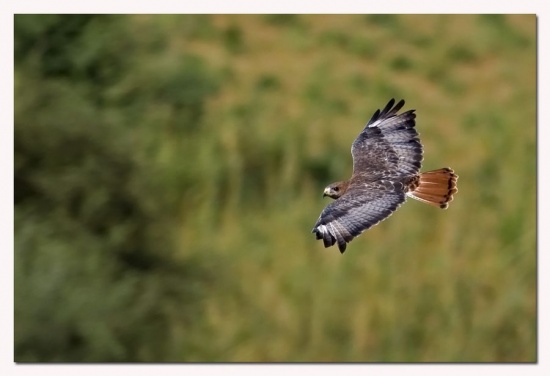 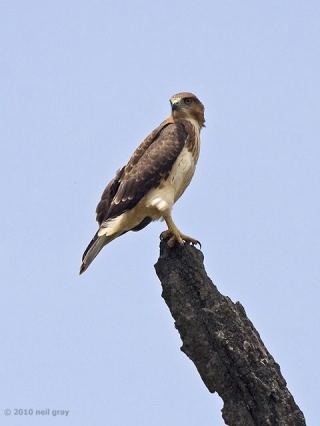 Smaller than similar Augur Buzzard and found in different habitat.

Found in Africa from Guinea and Sierra Leone east to Sudan, South Sudan and western Ethiopia and south to DR Congo and northwestern Angola.
Outside breeding season also farther north into Sahel zone.
Common in its range.

Feeds on small animals. Known to take rodents, snakes, lizards, chameleons, small birds, crabs and frogs. Takes also arthropods.
Perches for long periods in the open on a pole or a dead tree and takes most of its prey from the ground. Recorded hawking insects above bush fires.

Breeding seasonfrom January to May in western and northeastern Africa. The nest is a platform made of sticks and leaves, placed high in a tree, 10 to 30 m above the ground. Nests sometimes on a cliff ledge and nowadays on pylons (especially in Ghana). Lays 2-3 eggs.

In West Africa moves south in late September to early November after the rainy season to breed along the forest edges. Moves back north again from March to May into drier areas. Forms small groups or even larger flocks during migration. Movements in central and north-east Africa not well studied.

Search for photos of Red-necked Buzzard in the gallery