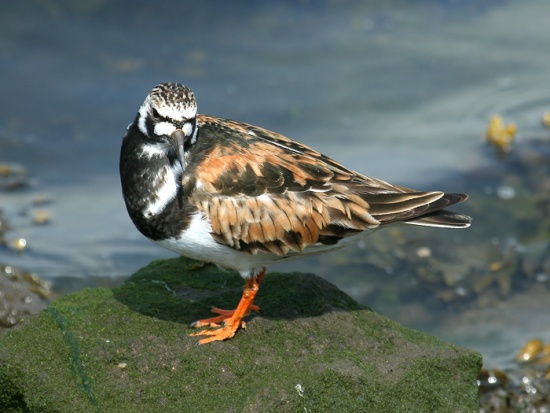 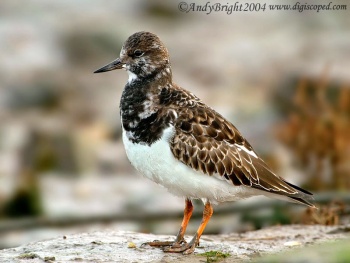 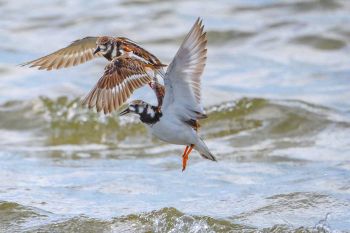 The summer breeding plumage (from which it gets its name 'ruddy') can be seen for a month or so (mid April to mid May) before they migrate to the Arctic to breed, and again for a month after they return in late summer (August).

Black Turnstone, which occurs with Ruddy Turnstone on the west coast of North America, is structurally very similar, but marginally larger; it is much darker blackish-brown, and in the breeding season has less white on the head, only a small white spot at the base of the bill and a weak white eyebrow. Its legs are also dark brown, rather than orange.

A widely distributed species along shorelines of continents. Breeds on tundra in the extreme northern latitudes of North America, Europe, and Russia; also a small relict population further south in the Baltic Sea and islets in eastern Denmark.

Overwintering range on coasts almost worldwide. Generally rare inland and on fresh water, but fairly common on the shores of the Great Lakes of North America during migration.

Formerly considered a plover, it is now classified in the sandpiper family.

Fairly long-lived, with an average around 9 years and a recorded record of 22.

A strong flier that during migration is able to fly from southern Australia to Taiwan in one stretch.

The action of flipping over small stones to find food led to its common name. It will take just about anything organic, including insects, carrion, molluscs, eggs, worms, etc.

Search for photos of Ruddy Turnstone in the gallery