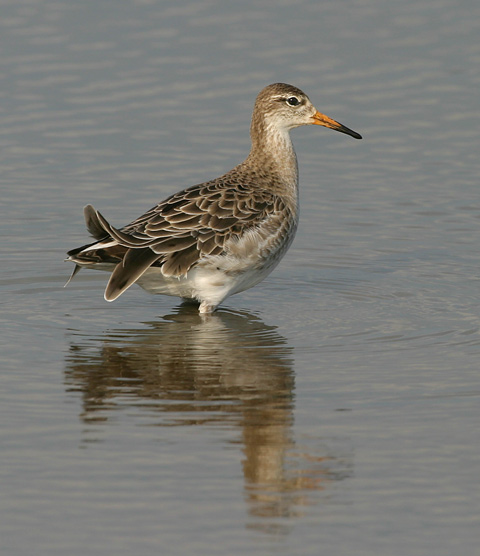 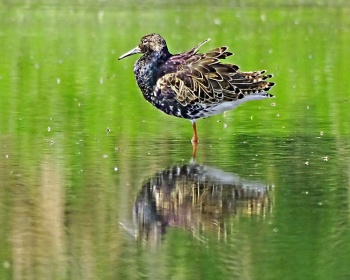 26–32 cm (10¼-12½ in)
Variable plumaged wader; male much larger than female. Small head on long neck. Legs can be green, yellow, orange or flesh-coloured.
Breeding Male Has extra-ordinary ear tufts, crest and erectile ruff - black, brown, white; barred or streaked. Belly and sides of rump are white. Black breast. Pale narrow wing bar. Bill may be brown, red or yellow.
Female, Juvenile and winter Male: brown, streaked darker above with a buffy breast.
Their feathers seem to 'ruffle' more easily in the wind than happens with other waders.

Winter males similar to Common Redshank but look round-shouldered and pot-bellied in comparison. 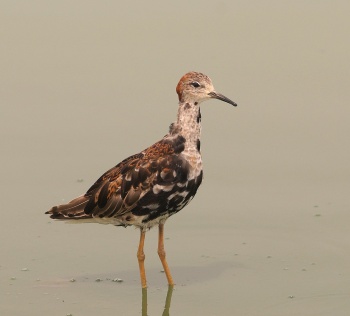 Breeds in the Arctic and sub Arctic regions of Northern Europe and Asia.

On migration can be found anywhere along the coast of Western Europe and at inland wetland sites.

Large numbers winter in East, South and West Africa, although birds may be found in India and further East. They will travel large distances on migration, birds from Eastern Siberia have been found in West Africa

This is a monotypic species[1]. Formerly placed in the genus Philomachus.

Breeds in bogs, marshes and wet meadows. Winter, and on passage, can be found on inland marshes, lake shores, occasionally estuaries.

They build their nest in a well-hidden location on the ground, and 3-4 eggs are laid.

Search for photos of Ruff in the gallery

Search for videos of Ruff on BirdForum TV