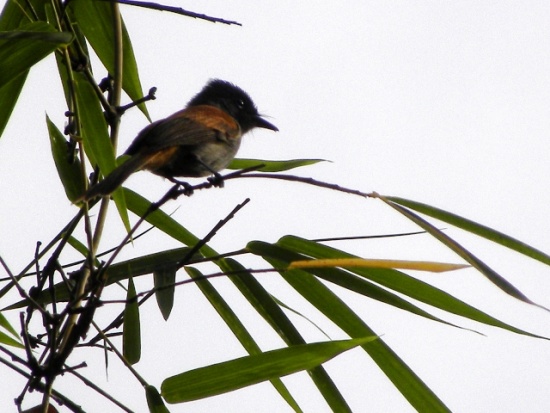 Females are duller, have glossy blue-back only from forehead to nape, a shorter crest and paler underparts.

Central Africa: From southwestern Cameroon south to western Gabon, southern Republic of Congo, southwest DR Congo and northwest Angola.
Common in most of its range.

Breeding recorded in January, February, August and November in Gabon, January in Cameroon and January, June and December in DR Congo. A monogamous species. The nest is an open cup made of moss, dry grass, fine fibres and spider webs. It's placed up to 6 m above the ground in a fork of a dead branch or in a trailing vine. Lays 1 to 2 eggs.

Search for photos of Rufous-vented Paradise-Flycatcher in the gallery