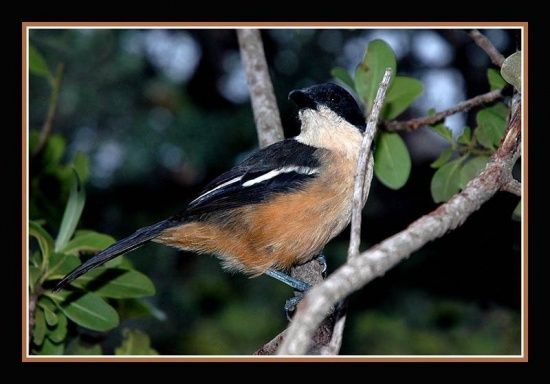 Length 21-23 cm (8¼-9")
Male -Upperparts black with a white wing-stripe. Throat and breast creamy white; gradual transition to rufous belly. The bill and eyes are black, and the legs and feet are dark grey.
Female -Greyer above with rufous wash on breast.
Juvenile - Mottled buff-brown above and barred below. 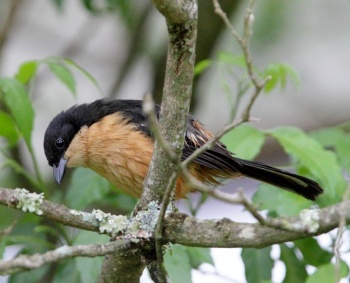 Resembles the Southern Fiscal but has shorter tail and the white wing stripe extends to the secondaries. It also behaves quite differently. The Boubou is a skulker in low vegetation while the Fiscal tends to perch up in the open. Distinguished from Tropical Boubou and Swamp Boubou by its rufous flanks, undertail and belly.

Laniarius ferrugineus has 6 subspecies[1]. These vary in size and plumage colouration.

Generally secretive and most easily found by following the call, but does become habituated to humans at picnic sites and in gardens. Responds to spishing.

Usually keeps to thick vegetation, where it forages mainly for invertebrates, eggs and nestlings, but also fruit and seeds.

The nest is a shallow cup of sticks, roots, grass and spider web, usually concealed in dense vegetation. Two to three eggs are laid August to February.

Search for photos of Southern Boubou in the BirdForum Gallery

Search for videos of Southern Boubou on BirdForum TV