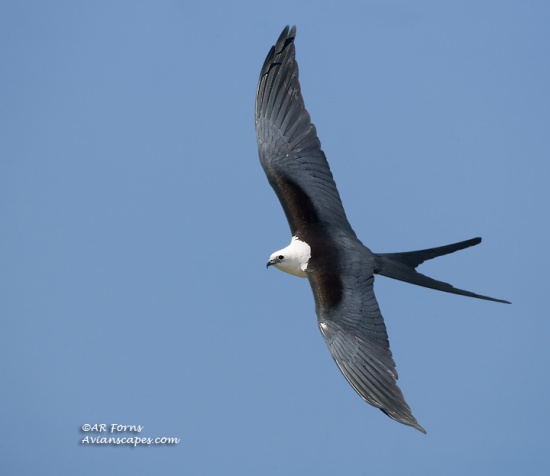 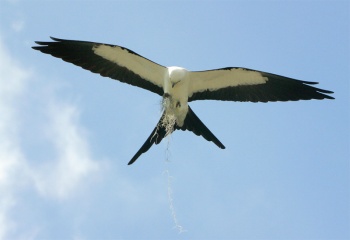 Immature Magnificent Frigatebird is mostly black with white limited to head and chest. It also has much longer head, bill, and wing. Light morphs of Short-tailed Hawk and Swainson's Hawk have similar color pattern but lack the long forked tail.

North, Central and South America. In North America breeds in mainly coastal areas from South Carolina south to Florida and along the Gulf Coast into eastern Mexico. More common and widespread in Central America south to Panama and in South America from Colombia and Venezuela (rare in Trinidad) south to northern Argentina. Formerly more widespread in North America breeding as far north as Minnesota.
Northern birds are summer visitors and migrate in large flocks to winter in South America. Occasionally wanders north to the Great Lakes and New England. The only accepted record for the Western Palearctic is of a bird in the Canary Islands in 1993 although there are other more doubtful records from elsewhere including Britain. 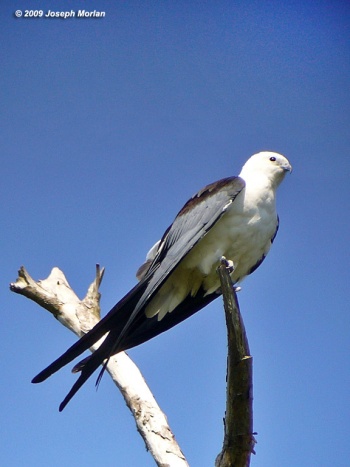 Formerly placed in the genus Milvulus.

This is a polytypic species[1]. Two subspecies recognized with the nominate race averaging larger:

Open woodland and forest often near rivers and lakes. In the USA often occurs in cypress swamps and open pinewoods. On the U.S. Gulf Coast best place to observe swallow-tailed kites is in the air above wooded riparian corridors. One such place is Liberty-Dayton, Texas.

Nest is a flimsy, shallow cup of twigs lined with Spanish moss placed high (>30 m) in the crown of a tall tree. Several pairs may nest in close proximity. Clutch size is 2 or 3 white eggs with bold brown markings. Both parents incubate eggs and feed young.

Insects (termite and ant swarms), lizards, snakes, tree frogs, bird eggs and nestlings, and occasionally fruit. Constantly soars, capturing insect prey and feeding on the wing, or snatching prey from treetops, which it often consumes in flight. Does not hover.

Migratory in the north and south of range. Also local movements, including attitudinal shifts during the non-breeding season in Central and South America.

Search for photos of Swallow-tailed Kite in the gallery

Search for videos of Swallow-tailed Kite on BirdForum TV