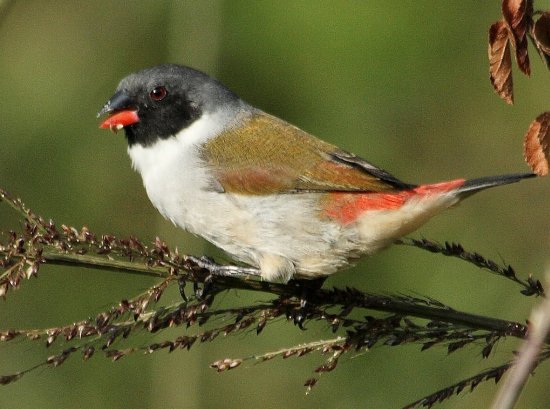 Length 9-10 cm, mass 8g
Adult male: Black face and upper throat contrasts with grey crown and nape and white lower throat. Breast pale grey and belly pale buff. Bill black above and red below and eyes red.
Adult female: Similar to the male, but has a pale grey face and white chin and throat.
Juvenile: Similar to the female, but duller, with a black bill and dark brown eyes. 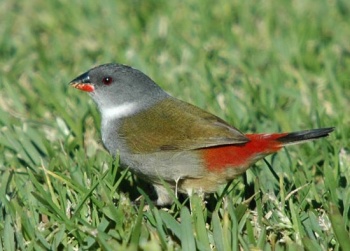 Southern and eastern South Africa, Lesotho, eSwatini, while rare or localized in Zimbabwe and Mozambique.

This complex has been placed in the genus Estrilda.

Does not move long distances, other than local altitudinal migration in some populations. Although fairly confiding, they are easily overlooked as they seldom venture far from dense cover.

Forages in pairs or small groups on plants and on the ground for seeds and insects.

Monogamous and territorial. The nest is enclosed and oval with the entrance on the side and near the top. It is built by both sexes using grass. Three to nine eggs are laid in summer (October to April). Parasitised by Pin-tailed Whydah.

The common name is derived from the "swee-swee" flight- and contact-call.

Search for photos of Swee Waxbill in the gallery