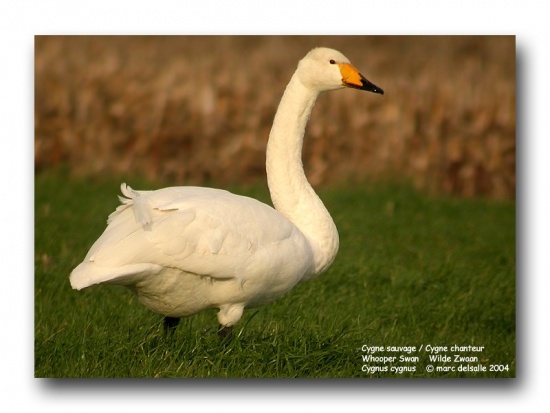 Mute Swan has a red bill, a longer, acutely pointed tail, and usually a more curved neck; juvenile Mutes also differ in darker brown admixed with some white feathers by winter. In Bewick's Swan the yellow on the beak has a rounded apex. Trumpeter Swan lacks the yellow on the bill, but is otherwise very similar, though the two species do not normally overlap in the wild. 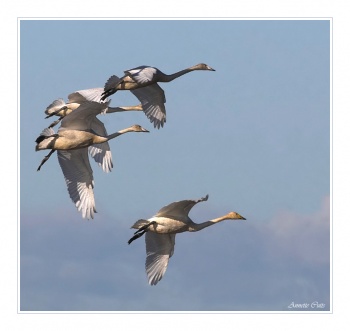 Breeds in Iceland, in small numbers in coastal north Norway, in north-central and sparsely in south-central Sweden, north and east Finland and across Arctic Russia. In recent decades has begun to breed in Poland and Scotland, and an occasional breeder in Estonia, Latvia, and Belarus. The small numbers breeding in Scotland (and occasionally Northern Ireland) may originally have involved injured birds that have been prevented from migrating, but the recent population growth in the far north (10-15 pairs, mainly in Shetland) is more likely fuelled by immigration from the increasing Icelandic population.

Icelandic birds are only partially migratory with some birds wintering, particularly in the west. The remainder winter in Britain and Ireland. There is no significant evidence for any wintering in south and east England from the Continental breeding populations, which winter from coastal north Norway to the Baltic and west to northeast France, in parts of Central Europe and around the eastern Mediterranean, Black and Caspian Seas. Leave breeding grounds mid September-October and begin return movement in March-April, arriving in May.

Wanders widely in severe winters and can turn up almost anywhere in Europe. Vagrant north to Svalbard and south to Israel and north Africa; also some records in western North America (mainly Alaska), when may be found together with Trumpeter Swans.

Breeds on lakes and pools in forest or on tundra, sometimes in river deltas, estuaries and sheltered sea inlets. In winter found in coastal areas or lakes and large rivers, often grazing in fields.

Search for photos of Whooper Swan in the gallery

Search for videos of Whooper Swan on BirdForum TV